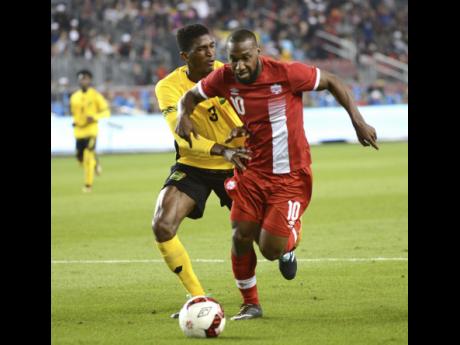 AP
Jamaica's Damion Lowe (left) tries to get a tackle in on Canada's Junior Hoilett during the second half of an international friendly football game on Saturday at BMO Field in Toronto.

National defender Damion Lowe says the Reggae Boyz need to start playing regular international friendlies again at the National Stadium in order to win back the hearts of the fans and generate greater support for the national team and its players.

In the last four to five years, the Reggae Boyz have rarely used the National Stadium or 'The Office', as it's more affectionately known to fans, to play international friendlies. The Jamaica Football Federation had said earlier this year that games at the venue had been fewer in number because of what it said are high costs associated with hosting international friendlies. As a result, most national team games inside the stadium have been restricted to competitive fixtures such as World Cup and Caribbean Cup qualifiers.

But Lowe argued that fans are eager to see their top players live and that players desperately need the support of the fans behind them to boost their confidence.

"It is important to play more games at home to win back the fans, because it is always important to have everyone behind you. Away games are played in hostile conditions and it is a challenge trying to develop, and getting used to what is to come. But local fans are calling for it (games at Stadium) and the players want to play on home turf," he said.

He added that: "The last game (at home) we won was against Suriname (Novermber 2016), and before that, we had not won a game at the national stadium for some time. So it will be a joy to come back to play in front of the fans and get good results."

Meanwhile, the 24-year-old, who recently moved from Seattle Sounders in Major League Soccer to IK Start in the Norwegian second division, said that the CONCACAF Gold Cup played a major part in him and other Jamaican players securing contracts, and he said that he hopes that they can continue using the tournament to opening doors for locally bred players.

"The Gold Cup helped me a lot to get the transfer. I had a had a lot of interest from European teams and I transferred to IK Start in the Norwegian second division," he said. "Also, Owayne Gordon, Kevon Lambert and Shamar Nicholson got a contract from the Gold Cup, so it was a successful Gold Cup regardless of the final game. So the Gold Cup was a good forefront for the young players to get an opportunity to be seen. We just have to go out and continue to open doors so other players can come through," he said.