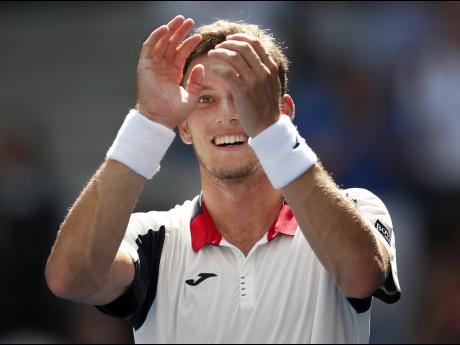 AP
Pablo Carreno Busta, of Spain, reacts after defeating Diego Schwartzman, of Argentina, during the quarter-finals of the US Open tennis tournament yesterday.

Pablo Carreno Busta reached his first Grand Slam semi-final by beating No. 29 Diego Schwartzman of Argentina 6-4, 6-4, 6-2 at the US Open yesterday.

The 12th-seeded Spaniard easily handled his first match of the tournament against an opponent who was not a qualifier.

Now Carreno Busta will face No. 17 Sam Querrey of the US or No. 28 Kevin Anderson of South Africa. None of those three men remaining on the bottom half of the draw has ever played in a major final.

Carreno Busta travelled a tame path to the quarter-finals, becoming the first man to face four qualifiers in a Grand Slam tournament during the Open era, which began in 1968. He didn't drop a set against any of those opponents and stayed perfect against Schwartzman while appearing in his second Grand Slam quarter-final.

Carreno Busta also reached the quarters in the French Open in June, but had to retire in his match against eventual champion Rafael Nadal because of an abdominal injury that forced him to miss Wimbledon.

The 5-foot-7 Schwartzman was the shortest quarter-finalist at a Grand Slam tournament since Jaime Yzaga, also 5'7", at the 1994 US Open. He was bidding to become the shortest in a major semi-final since 5-6 Harold Solomon at the 1980 French Open.