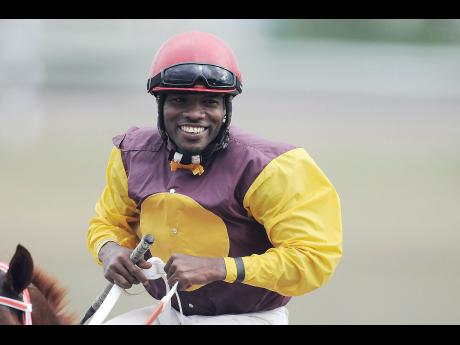 He opened his account in race six with 5-1 choice Sunny Truce and followed up in race seven with a score aboard 16-1 outsider Norabelle.

He was joined by six-time reigning champion Rico Walcott who steered favourite Credits Good to a 21/4-length win over the three-year-old and upwards, going six furlongs in race five.

Nelson, though, stole the headlines with his handsome double. He was forced to wait until deep in the day's programme before he could taste success, pairing with four-year-old bay gelding Sunny Truce to turn back the three-year-old and upwards by 21/2 lengths.

From the inside, Nelson stalked the pace set by Swift Arrow before charging to the front in mid-stretch and taking the wire comfortably.

Nelson was even more dominant in the day's final race, combining with three-year-old filly Norabelle in a front-running effort, to dismiss the three-year-old and upward fillies and mares by three lengths, going 61/2 furlongs.

Walcott leads the standings with 87 wins and is set to wrap up an unprecedented seventh straight title when the season winds up on Sunday.