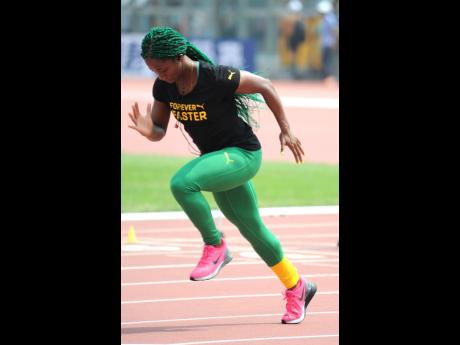 After all she has won, Shelly-Ann Fraser Pryce could have stayed on the couch after the arrival last August of her son Zyon.

Instead, she's been back in training with the MVP Track Club since October. In an exclusive interview, the 2008 and 2012 Olympic 100 metres champion said she still is hungry for success on the track.

Speaking just before a recent training session to be supervised by Stephen Francis at the University of Technology, the 2014 World Indoor 60 metres champion explained the reasons for her comeback.

"I'm extremely hungry and wanting to get back out there," she said, "and I still think there's a lot more to give and especially running faster than my personal best which is 10.70 and I still believe I'm able to achieve that."

That time of 10.70 seconds is a national record she now shares with Elaine Thompson, who followed her as Olympic 100 metres champion.

Fraser Pryce has run under 11 seconds in 41 races but the thought of going faster intrigues her.

"That still drives me because I believe it's there", said the woman who has 11 clockings under 10.8. emotively. "With the experience and everything," she submitted, "I believe that I know exactly the things I need to work on, where my focus needs to be and putting that solid race together and getting that out there."

Retired American Marion Jones is the only sprinter to have broken 10.8 more often, having done it 13 times.

Becoming a mother has helped. "Now that I have my son, it's such a joy to wake up and, not that it wasn't a joy before but now just to see him and go home to him after training and to come to practice knowing that I have my son," she smiled, "and I want to work even more."

"I'm relaxed more and just excited to take on the track", she revealed, "nothing gets me upset or cranky, especially some days when I come to training and I feel like training isn't going so well, I just take it in my stride."

Training is going well but she and coach Francis eased her back into the groove.

"One of the reasons why training was tailored a little is because I ended up having an emergency C-section so coach wasn't pushing me," she outlined.

"I'm just looking forward to what the year will be like and the years to come," she said expectantly.