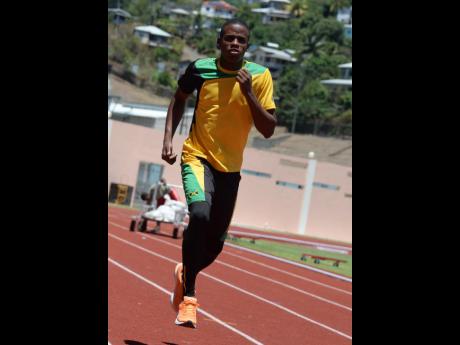 AFTER being out of competition for most of last season due to injury, former World 100m record holder Asafa Powell suffered another setback to his 2018 campaign at Saturday's Quality Logistic meet inside the National Stadium.

Competing in the final heat of the men's 100 metres, Powell pulled up with a hamstring injury at the 60m mark with former St.Elizabeth Technical sprinter Nigel Ellis going on to win the event in 10.24 seconds.

The second fastest time on the day over the event came from Sprintec's Rasheed Dwyer, who won his heat in 10.27 seconds. Tyquendo Tracey of MVP, who was second to Ellis in 10.34 seconds, was third best on the day.

There were some good results among the females in the 400 metres as athletes seek places on the national team to next month 's World Indoor Championships.

Leading the way was Janieve Russell of MVP Track Club, who clocked 52.14 seconds to win her heat, just getting the better of Tiffany James of The Mico University College, who clocked 52.25 seconds for second, with veteran Anastasia Le-Roy finishing a creditable third in 52.55 seconds.

It was double success on the day for the multi-talented Russell, who also won the women's 400 metre hurdles in 55.98 seconds.