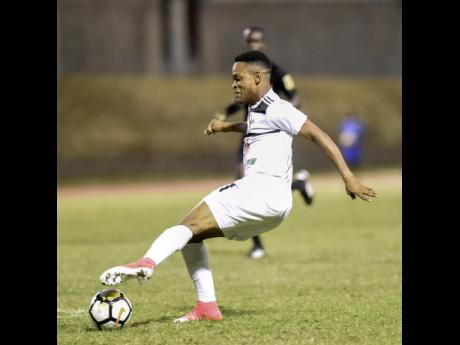 With three game days to go before playoff round of the Red Stripe Premier League (RSPL) begins, the jostling for the minor places in the top six continues today with five games.

Fourth-place Cavalier should have been assured of their place at this time, but dropping 10 points from their last 15 suggests that they are limping to the line and should manage to hold on to a top six despite their tough matches ahead. Today, they play away to ninth-place UWI FC, who are still in with a chance on 39 points. Cavalier will next go against the battling Reno at home before closing out the regular season against defending champions Arnett Gardens.

Fifth-place Waterhouse are enjoying the best form of all 12 teams in the league over the last five games. They are the only team not to register a loss over that period and their last three were wins. Those results put them in a favourable position, especially today, when they host Montego Bay United - a team also battling for a top six position.

Waterhouse will follow up today's game with another home game, this against coach Donovan Duckie's last team and fellow top-six aspirants Humble Lion FC. This is another game they should be fancied to win, and what makes their situation even better is that their final regular season game is against the already-relegated Boys' Town.

Montego Bay United should not be written off for today's game or for a spot in the top six as with the wounded warrior Dino Williams, Lesly St Fleur, and Ronaldo Rodney, they have players capable of pulling off an upset. Their next game will be equally tough as they host leaders and favourites Portmore United. Portmore United, while obviously better and deeper than the rest, have shown that they can be beaten and only rebounded in their last game with a 2-0 blanking of Reno from back to back 0-3 and 0-1 losses to UWI FC and Waterhouse, respectively.

Montego Bay's final game of the round should be another humdinger as they play away to Humble Lion, who are on 30 points. The Lions followed up their 5-1 mauling of Cavalier with a 3-0 away win over the relegated Sandals South Coast and are making a desperate push for the top six. Their position could be improved when they meet Montego Bay United if they manage to get the better of the safe, but stumbling, third-place Tivoli Gardens when both teams meet today.

In their last three matches, Tivoli Gardens had a win over Arnett Gardens, sandwiched by two 0-1 home losses to Montego Bay United and Waterhouse. What Humble Lion also have going in their favour today is home advantage.

Sixth-place Harbour View had an up-and-down season, and they will have to stay on the up in order for them to keep their top-six position. Today's away game to Reno is a tricky one, and any slip could see them slide out of the top six.