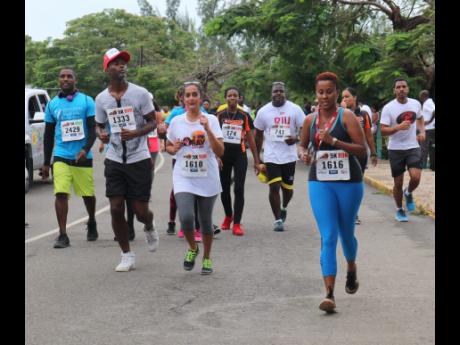 Janet Silvera
Runners and walkers making their way on the streets of Montego Bay.

​The organisers of the Mobay City Run announced earlier this week at the Holiday Inn Resort’s launch of the annual 10K and 5K run/walk their five in five plan for this year’s fifth staging.

“That is where we are in this our fifth year. We will be shooting to have five thousand participants and we are dead set on raising five million dollars to education,” said chief organiser, Janet Silvera.

Since the run’s inception four years ago, four tertiary institutions have benefited from the proceeds of the Mobay City Run in excess of $15 million dollars - the University of the West Indies and University of Technology (western campuses), Sam Sharpe Teachers' College, and Montego Bay Community College.

Mobay City Run, which for the first time last year donated half a million to early childhood education, will this year also venture into the secondary school arena.

“For the past three years, we really focused our attention on college students. This year for the first time, we will give five hundred thousand dollars to Mount Alvernia High School,” said Silvera.

The race that will get on the way on Sunday, May 6 will see a change in the route according to Logistics Coordinator of Mobay City Run Emerson Whittley, who said with the growing numbers, they will not be going through the town this year, as a means to reduce traffic build up.

“This year we won’t be going through the town. We will start at the old hospital park, continue straight along the Howard Cooke Boulevard. We will make a U-turn for the 5K at the Catherine Hall Entertainment Centre, while the 10K will go on to Secrets (resort), make their U-turn and both head back to the Old Hospital Park,” said Whittley.