Top Shelf upsets at 30-1 in feature 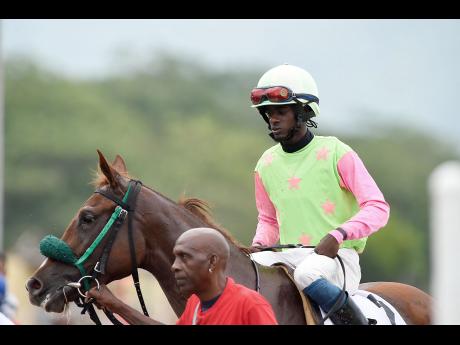 Gladstone Taylor
The two-year-old filly TOP SHELF (Hakeem Pottinger up) is led to the winners' enclosure after her 30-1 upset win in the 14th running of the Cash Pot "Only One For Me" Trophy race over 1200 metres at Caymanas Park yesterday. Caymanas Park Horse Racing held at Caymanas Park in St Catherine on Saturday.

TOP SHELF yesterday stunned the favourites at odds of 30-1 in the Cash Pot Trophy for two-year-olds, and six-time champion jockey Omar Walker attained his 1,000th winner locally with a three-timer, reaching his milestone with a thrilling finish aboard WITHOUT EXCEPTION in the seventh event at six furlongs.

Kicked out of the betting as Gary Subratie's CASUAL DRINK lit up the tote board at odds of 3-5, and BALTUSROL drifted out to 5-2, TOP SHELF sat third in the cat bird's seat down the backstretch, watching TREVOR'S CHOICE playing spoiler on the lead shortly after the start.

Led for the first time after virtually making all on debut earlier this month, CASUAL DRINK failed to kick when TOP SHELF swooped down off the final turn and grabbed the lead entering the straight.

Hakeem Pottinger kept TOP SHELF rolling up the lane as CASUAL DRINK tried in vain to reel her in but was no match for the Soul Warrior-First Choice offspring, who won by two lengths, clocking 1:14.1 for her second consecutive win from three starts.

PRINCESS ANNIE improved into third a furlong out, getting the better of BALTUSROL, who finished a disappointing fourth after beating TOP SHELF on their debut in August.

Walker's 1,000 winners, the fastest of five recorded at Caymanas Park, hogged the spotlight from the new apprentices, two of whom entered the winners' enclosure on their first day of competitive riding, Tyrone Foster and Christopher Mamdeen, who won aboard MILARGO and CRUCIAL'S TREASURE, respectively.

Walker won the opening event astride MR LYNDHURST, grabbed his second with CALL TO DUTY in the fifth, handing trainer Leroy Francis his first career win, before returning to outbattle ZEPHYR aboard 4-5 favourite WITHOUT EXCEPTION.

Trainer Anthony Nunes and Dick Cardenas combined to win three of the last four events on the 11-race card, including FAYROUZ in the seven-and-a-half furlong Fontainbleu Trophy, outduelling her St Leger conqueror, MARQUESAS, in a last-furlong thriller.

Cardenas and Nunes' other winners were 6-5 favourite ICE COLD in the eighth and ADONIS at 5-2 in the closing event, a battling victory over Spencer Chung's 7-5 favourite, SEA SWAN, with Aaron Chatrie astride.

Cardenas' three-timer has moved him to within 17 of leading rider Anthony Thomas, who logged one winner, QUEEN'S HIGHWAY, in the ninth, setting the stage for an interesting last quarter in the jockeys' championship.