On top of the world! - Alia Atkinson breaks own record at Swimming World Cup 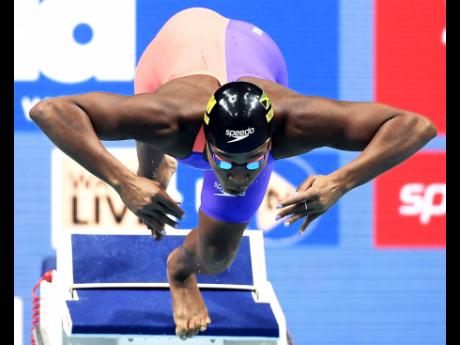 AP
Jamaica's Alia Atkinson on her way to victory in the women's 50-metre breaststroke final of the Swimming World Cup in Budapest, Hungary, yesterday. 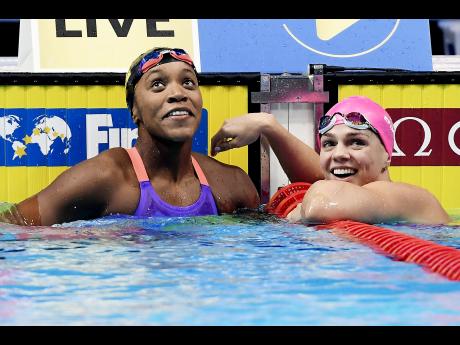 AP
Winner Alia Atkinson of Jamaica (left) and runner-up Yulija Efimova of Russia look at their times after the women's 50-metre breaststroke final of the Swimming World Cup at the Duna Arena in Budapest, Hungary, yesterday. Atkinson set a new world record in the event.
1
2

President of the Aquatic Sports Association of Jamaica Martin Lyn says that Alia Atkinson's new world record effort shows that she is dedicated to greatness.

Atkinson lowered her 50 metres breaststroke world record to 28.56 seconds, shaving .08 of a second off the previous mark at the FINA (Short Course) Swimming World Cup in Budapest, Hungary, yesterday.

Yuliya Efimova of Russia finished second in 29.22, while American Molly Hannis grabbed the bronze medal in 29.51.

"This just goes to show Alia's dedication to training and to want to be the best that she can possibly be," Lyn told The Sunday Gleaner. "I hope young swimmers, and young Jamaicans, for that matter, are paying attention because she is definitely carving out the path of an icon," Lyn said.

Atkinson first broke the world record in this event two years ago in Tokyo, Japan. In that same year, she equalled Lithuania's Ruta Meilutyte's 100m breaststroke world record with her 1:02.36 effort in Chartres, France, to become the first black woman to win a world swimming title.

"The swimming association is lucky to have someone like this performing this well to keep on attracting new talent to the sport," Lyn said. "The way she has approached the sport is second to none. It is not easy to stay at the top of any sport, especially aquatics. We are really proud of her," Lyn said.

Grange described Atkinson, who is coached by Chris Anderson in Florida, as a "phenomenal athlete who continues to do extraordinary things".

"This is an extraordinary achievement for Alia. I know she felt personal disappointment with her performance at the Commonwealth Games, but we were proud of her silver medal. But now, here she is, five months later, breaking her world record.

"It goes to show: we must never give up. Alia continues to be an inspiration for us all, and we are all very proud of this latest achievement."