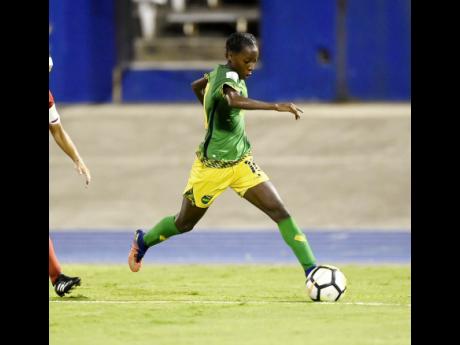 Jamaica's Reggae Girlz could make history this evening when they face the United States in the feature semi-final of the CONCACAF Women's World Cup Qualifying tournament in Frisco, Texas.

The equation is simple. Defeat the hosts and defending champions United States and earn a place in the 2019 World Cup Finals for the first time.

"It is quite possible that we can beat the USA and get into the final because the Girlz are upbeat and prepared. The USA has to be nervous," Wint said. "It would be great to mark playing in the World Cup 20 years ago with another qualification."

The task, however, is an uphill one. The Americans are number one on the FIFA rankings list, the Reggae Girlz are 64th. In the qualifying groups, the United States topped Group A with a maximum nine points, scoring 18 goals with none against. Jamaica's record for second in Group B was 10 for and two against.

A defeat today will not be the end for the Girlz. They could still win the third-place match on Wednesday and earn a spot in the World Cup. The top three finishers in the tournament will earn CONCACAF's spots in the World Cup while the fourth-place team will meet Argentina in a playoff for a berth.