I deserve my own mandate, says JFF boss 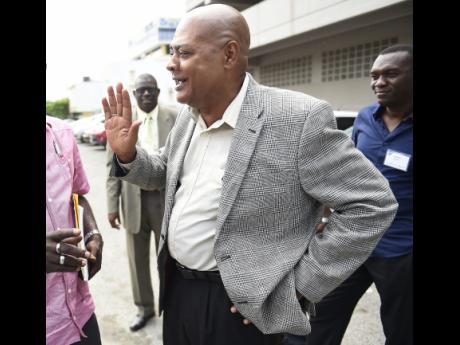 In September, Michael Ricketts told The Sunday Gleaner that if the Reggae Girlz achieved qualification for the 2019 FIFA Women's World Cup it would be the landmark achievement for his tenure as president of the Jamaica Football Federation (JFF).

And now that the Girlz have made that a reality by beating Panama 4-2 on penalties in the CONCACAF Women's Championships third-place play-off game last Wednesday, Ricketts thinks he should be given his own mandate to help the Reggae Boyz qualify for their second World Cup.

Ricketts, who took over the reins of the JFF after the passing of Captain Horace Burrell in June 2017, said his administrations has the know-how to get Jamaica's football back to prominence, and they have exemplified that with the qualification of the senior women's team to the World Cup.

"This JFF is made up of some real knowledgeable, influential and committed people, and as long as we have the resources we will continue to do well," Ricketts said. "When we took over, there was no women's programme and we decided that we would restart it.

"We never had a national premier league going on for women and the Under-15 parish competition was aborted. So we restarted both competitions and we decided that we were gonna give the women's programme some kind of support and we re-engaged the coaches, and like they say, the rest is history."

The Reggae Girlz are now the first women's team from the Caribbean to qualify for a FIFA tournament, and Ricketts said this, among a long number of other firsts his administration has achieved, is worthy of another tenure in office.

"I have always said that I want to be a humble but effective leader, and I want to ensure that at the end of my tenure we would have achieved a number of things, and so far we have not done badly. We have had some firsts. First time to have a (FIFA) summit in the Caribbean, first time to have a synthetic pitch in Jamaica, construction has started for that, and the most important of all, first time qualifying a female team, not just from Jamaica but from the Caribbean, and this is the kind of impact that we want to have nationally," Ricketts said. "I think with all we have done, I think it is worthy of another shot at it and I personally would want my own mandate."

If Ricketts should be given a second stint in office, his administration would oversee the 2022 World Cup campaign, one, according to him, for which he has already laid the foundation.

"We have started the campaign to qualify the Under-23 team for the 2020 Olympic Games and then lead right into the World Cup, and I believe with the right kind of resources, we can achieve this," Ricketts said.

The former Clarendon Football Association boss and South Central Confederation chairman was elected the 13th president of the JFF at a voting congress in September last year to complete the 2015-19 mandate, following the death of former president Captain Horace Burrell. He defeated Ambassador Stewart Stephenson.