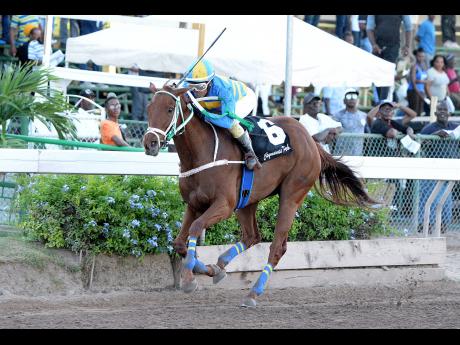 CHRISANLI returned from a five-month rest to score impressively over 1100 metres on August 18 and is the firm selection to make it two in a row in tomorrow's opening race of the Sunrise-Six.

The Anthony Subratie-trained colt romped that event, winning by 23/4 lengths, in a fairly good 1:08.0. He is back to face nine opponents over 1200 metres with a lot in his favour. His main rival, AMAR, has been putting in some fairly consistent performances, but when the two met over 1000 metres straight last December, the lightly raced CHRISANLI won by more than three lengths.

Race Two should provide SQUIT with a long overdue victory. He gets an ease in the weights and should take full advantage with 4kg claiming apprentice Raddesh Roman aboard. Toting 57kg, SQUIT chased the out-of-class Mrs Awesome all the way over 800 metres straight on September 26 and ended up second by six lengths. With no starter with the quality of Mrs Awesome around tomorrow, SQUIT will take charge early in the 1100-metre race for five-year-old-and-up maidens come home on a canter.

The third race over 1600 metres should prove to be very competitive with ALSO CORRECT, MINNIFIA, SUPREME MAGIC, and FOOT SOLDIER all having strong chances. FOOT SOLDIER, with champion jockey Omar Walker aboard, drops back to $250,000 claiming after two eye-catching efforts at the higher level on August 26 and October 13 and is the one to beat.

In the latter event, FOOT SOLDIER led in splits of 47.0x1:12.3 for the first 1200 metres of the 1400-metre race and a similar effort tomorrow will be good enough to win ahead of MINNIFIA.

LADY JAELA is a firm banker in the fourth. She will travel over her favourite distance, 1000 metres straight, where she clocked 58.2 while placing ninth by five lengths in overnight company on September 8. She did weaken badly when contesting an 1100 metres race in high claiming company on September 22 but there is nothing in this field take her off the bridle early and she will cruise home an easy winner.

MYSTIC MAMMA should give Devon Thomas a Sunrise-Six double in the fifth while GIACONDA will provide another win for the red hot Dick Cardenas in the sixth.