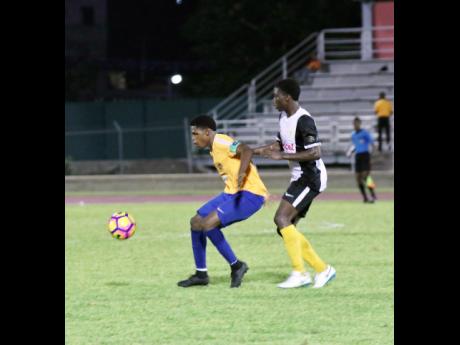 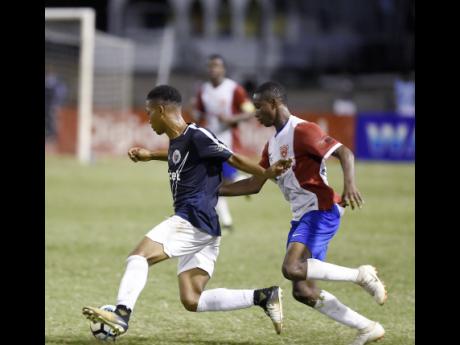 Andrew Peart, coach of Jamaica College (JC), believes that his team is perfecting the art of grinding out wins after the boys from Old Hope Road came from behind to beat a defiant Holy Trinity High 2-1 in the ISSA Champions Cup, yesterday.

Trinity took the lead in the 19th minute with a strike from Roy Evelyn, but prolific striker Norman Campbell restored parity in the 29th minute for the blues.

Before the halfway mark, Trinity created a flurry of chances but failed to put the ball in the back of the net. And when the game seemed to be headed for penalties, Campbell scored his second in the 88th minute to secure his side's spot in the semi-finals of schoolboy football's premier knockout competition.

"The mentality of the players is to never give up and to be comfortable under pressure," Peart said after the game. "It is not just with this group of players, but the entire school. Today, we went behind early, and we didn't allow them to lead for very long, and immediately after they scored, we found the equaliser."

His counterpart, Devon Anderson, was disappointed to end another season without a trophy.

"Different game same old story because we created a lot of chances as we have been doing from the second round of the Manning Cup competition, and we failed to put them away, and JC took their chances," Anderson said. "When I prepare a team each season, I want to win a trophy, and it is a great disappointment every year to be falling short."

St Elizabeth Technical High also booked a place in the semi-finals of the competition. The Santa Cruz-based school registered a 2-1 victory over Charlie Smith High.