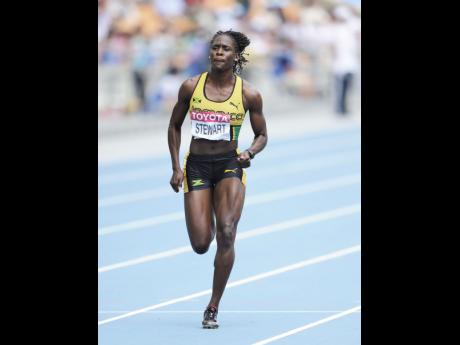 Approximately 2,000 student athletes compete at ISSA/ GraceKennedy Boys and Girls Athletics Championships each year, but our Olympic team has just about 60 athletes. That math makes fools of those who predict greatness for Champs stars prematurely. Still, success seemed to be on the cards for the redoubtable Kerron Stewart, even before she ran at the biggest high-school meet in the world.

At the Penn Relays this April, she was as fast as ever. Racing in black, green and gold for the last time, Kerron burned the second leg to put Jamaica in position to win the USA versus the World 4x100m. It was business as usual on her 18th consecutive trip to storied Franklin Field. Once an all-round sprint prospect at John Mills All-Age School, Kerron has hit the gas at Penn for St Jago High, Essex Community College, Auburn University and Jamaica.

She's been a winner everywhere, stacking up Boys and Girls' Championships, Carifta, Junior College, NCAA and NACAC titles, and medals at the World Championships and the Olympic Games. Relaxed and determined, her weapon has been a ground-gobbling stride powered by an unmatched top gear.

Seventh in the 2007 World 100-metre final, she showed presence of mind a year later in Beijing at the Olympic Games. When others froze, she recovered from a twitch in the blocks by American Torri Edwards to tie Sherone Simpson in the unique 1-2-2 100-metre finish behind Shelly-Ann Fraser-Pryce.

She left Beijing with another medal after a strong third place in the 200m, won by Veronica Campbell-Brown.

Even better in 2009, she lost to Fraser on the line in the 100m at the Berlin World Championships. At that point, her personal best of 10.75 seconds placed her third on the Jamaica all-time list. Later, Stewart anchored Jamaica to victory in the 4x100m.

She never stopped speeding. She raced into three more World Championship individual finals, compiling a career total of 26 sub-11 100-metre clockings along the way. In 2009 alone, she had 10.

A relay expert since her St Jago days, the Athens/Beijing/London Olympian helped Jamaica to win the 4x100m at the 2002 World Junior Championships. Over the years, she ran every leg and duly won Olympic silver in 2012 and two more World gold medals in 2013 and 2015.

When she blazed the second leg at Penn, those memories rushed back. With them came the recall of her dignified presence, which impressed as much as her speed.

Had she chosen the 400 metres, she might have been equally successful. As evidence, she won a bronze medal in the Class Two 400m in 2000 and played a key role when Jamaica set a national Junior 4x400 metre record at Penn in 2001. That mark - 3 minutes 29.66 seconds - has stood the test of time as much as Kerron has.

She closes her track rÈsumÈ as a member of an elite group of Jamaican women to have broken both 11 and 22 seconds and to have Olympic medals in both the 100m and 200m. Her haul of two Olympic silver medals and a bronze is nothing to sneeze about.

As with the incomparable Usain Bolt and Novlene Willliams-Mills last year, it's sad to see her go. All three were present at the 2004 Olympics, where Kerron was an unused relay alternate. Still, she has gone through the exit gate after acquitting herself brilliantly for Jamaica. Warm and engaging, she was a champion who won friends for Jamaica. On top of everything, Kerron represents one of those times when the early prediction of success was right.

- HUBERT LAWRENCE has made notes at trackside since 1980.