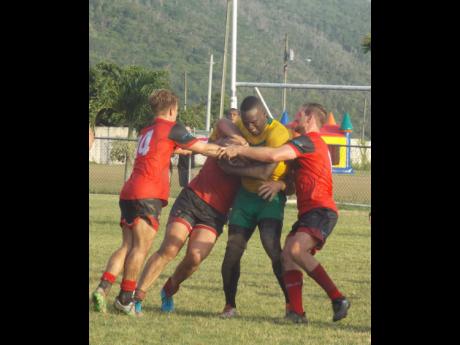 Jamaica's Ethon Dwyer (centre) is challenged by members of Canada Wolverines' Rugby League team during their match in the Americas Championship at the Mona Bowl on the campus of the University of the West Indies on Saturday, August 26, 2017. The Jamaicans defeated the Canadians 38-8 in Florida on Tuesday.

Jamaica's Reggae Warriors are one win away from a spot in the 2021 Rugby League World Cup after a 38-8 win over the Canada Wolverines in Florida on Tuesday night.

Assistant coach Roy Calvert said that despite racking up a score of 38, the attack was not as clinical as it should have been, however, he described the Warriors as having an "outstanding defensive attitude".

Head coach Romeo Monteith was pleased with the performance and the leadership shown by the senior players.

"I thought the Reggae Warriors had a good game," he said. "First half was a bit difficult at some points. We had a bit of difficulty with some penalties, especially near the end of the first half. That was the turning point of the game, though, because we defended about four straight sets on our try line. That really lifted the spirits of the boys. In the second half, it was total dominance for the last 40 (minutes)."

After their 62-0 win over Chile, also on Tuesday night, the USA Hawks now meet the Reggae Warriors on Saturday, with the winner automatically qualifying for the World Cup. The losing team still has another chance at qualification, but would have to play an intercontinental playoff versus South Africa and the Cook Islands.