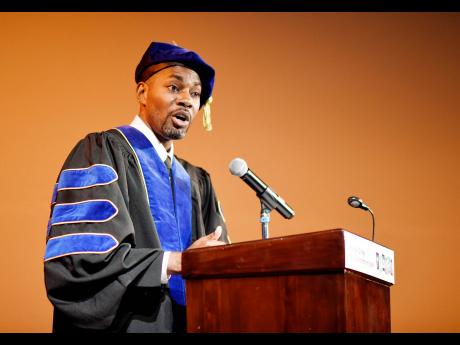 GladstoneTaylor
Olympian Dr Gregory Haughton delivering the keynote address at the 2018 graduation ceremony of the Edna Manley College of the Visual and Performing Arts, yesterday.

Olympian Dr Gregory Haughton says that a great deal of emphasis should be placed on mental training for the country's track and field athletes if the nation wants to maintain its dominance in the sport.

Speaking to The Sunday Gleaner after giving the keynote address at the 2018 graduation ceremony at the Edna Manley College of the Visual and Performing Arts yesterday, Haughton said that the departure of sprint king Usain Bolt has taken a lot of the sting out of the sport.

"I think we first need to build that foundation in terms of adding mental training as a major part of the development programme," Haughton said. "I think the retirement of Usain (Bolt) has taken a lot of energy out of the system, not intentionally, but his presence was so great that people would ride off his magnetic energy," he said.

"With him (Bolt) out of the picture, the little man who needed something to motivate him may not have that anymore, and so what we need to do is make sure that mental training is implemented early at the primary level, and so as the athletes gets older, they are not struggling to bring out their best performance, which is a mental thing," Haughton said.

Haughton, one of Jamaica's best-ever 400m runners who won a bronze medal in the one-lap event at the 2000 Olympic Games in Sydney, Australia, added that this is best crop of athletes that the country has ever produced but that we have to ensure that they are properly prepared for international tournaments.

"We have been doing great so far off sheer talent. I think that if we don't want to end up like the West Indies Cricket Board, where we are struggling to survive, I think we need to put things in place now so that we can continue to strive," said Dr Haughton.

"If you look at the countries who used to dominate track and field, they can't even win one single medal," Haughton said. "I remember the days when we had to struggle, especially at the junior level, to win a medal, and so it is important to put in place a foundation to help the junior athletes so that as they mature into professional athletes, they can hold their own," he said.

Haughton who holds a BA in Communications from George Mason University, a MBA from William Howard Taft University, and a PhD in Business Management from North Central University, told the graduates at yesterday's ceremony that they should be vigilant in their quest for excellence.

Among the graduates were the Principal's Awardees from the various departments. They are Leighton Estick (School of Visual Arts), Janoy Ellis (School of Music), Nadia Brown (School of Drama), Latoya Tingle (School of Dance), and Shanique Benjamin (School of Arts Management).