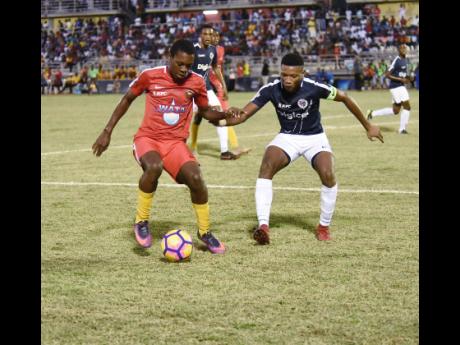 There were wild celebrations in Montego Bay last night as Cornwall College became the first rural, area school to win an ISSA Champions Cup title in the four years since the competition started.

The boys from Orange Street in Montego Bay showed ample signs why they might be schoolboy football's most dominant force this year when they put on a passing clinic against the 'Dark Blues', who were regarded as the kingpins of high school football coming into the season after winning five straight Manning Cup titles.

Shavon 'Dadadee' McDonald sent the sea of supporters donning the red and gold into a frenzy in the 19th minute when he scored from an acute angle past JC goalkeeper Khari Williams.

The travelling JC fans tried to lift their side's spirit with a number of cheers, but they were quickly drowned out by the thousands of Montegonians who roared at every pass produced by the brilliant Cornwall midfield.

And after the final whistle was sounded, Dr Dean Weatherly was elated but was still cognisant that the job was not yet done.

"On Monday, we are going to celebrate this trophy, but right after that, it is back to the drawing board because we have another final to play," said Weatherly, whose boys are scheduled to take on Clarendon College in the daCosta Cup final next Saturday at the same venue.

"It was a little bit hectic in the last part, but I am thankful everything came through," he added as scores of fans stormed the playing area to hail their heroes.

Andrew Peart, who is in charge of the JC team for the first year after the departure of Miguel Coley, admitted that it was a disappointing season.

"The results have been disappointing, losing at the semi-final of the Manning Cup and losing this one, but I still think we gave it our best shot."