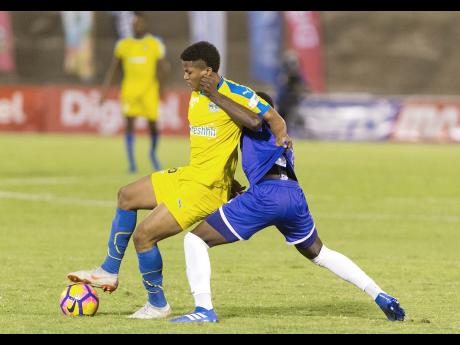 On the day when their former coach Winston Chung-Fah was laid to rest, ISSA/WATA daCosta Cup champions Clarendon College (CC) delivered the last piece of silverware to commemorate the life of the man who guided them through their finest football era.

CC, who have been dedicating their 2018 schoolboy football success to Chung-Fah, who passed away last month, claimed the ISSA Olivier Shield with a 1-0 over ISSA/Digicel Manning Cup Kingston College last night at the National Stadium.

The moment was fitting as Chung-Fah led CC to their first Olivier Shield title 41 years ago when current coach Lenworth Hyde was a player.

Andre Nicholson's long range strike in the 88th minute stole the victory for Clarendon after KC wasted a flurry of chances in both halves.

Hyde was also getting one over on KC, whom he coached in the in the 2014 season until his dismissal.

The victory also ended the rural area schools' 14-year wait to lift the trophy that has long been regarded as the decider of where schoolboy football's dominance lies.

"I know coach Chung-Fah will be smiling now," Hyde said. "He was the 12th man on the field. KC created a lot of chances, but they refused to go into the goal. But we kept discipline. This was our year, from jump street, I felt it."

Ludlow Bernard, KC's head coach, said before the game that he felt little pressure heading into the contest, however, after the final whistle, he rued his team's attacking deficiencies.

"Classic case of missing chances," Bernard said. "We created the bulk of the chances, but we failed to capitalise. It was just an off day. Congrats to Clarendon. They played well."