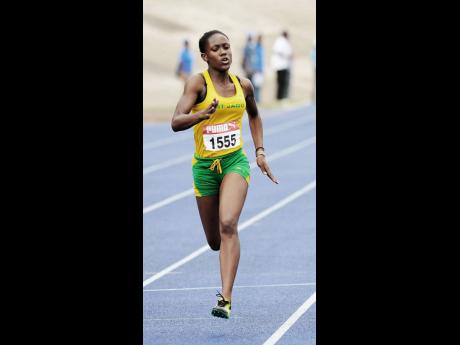 Former  Youth Olympic Games gold medallist Natalliah Whyte believes she and her former collegiate teammate Jonielle Smith are ready to become the face of Jamaica’s female sprinting.
Whyte, who primarily runs the 200 metres, dropped her time in the 100 metres last season from 11.56 to 11.04 seconds.
Smith, who is now a professional athlete after graduating from Auburn University last year, also lowered her time in the 100m to 11.07.
“I really think we can [be the next set of great Jamaican female sprinters],” Whyte told The Gleaner. “We are upcoming athletes and we still have a lot of room for improvement.


“Track and field is both mental and physical and I think we are mentally prepared and we have also proven that we have the potential so we just have to work hard to get to where we want to be.”
Whyte said her main objective this season is to make her first senior team but she is worried she might not be able to attend the IAAF World Athletics Championships as its schedule will conflict with school.
“I am not sure about the World Championships yet because I am hearing that student athletes in the NCAA might not be able to attend,” she said.
The Gleaner is not able to confirm whether NCAA will prevent their athletes from competing at the Championships, which is scheduled for September 28 to October 6 in Doha, Qatar.
The St Jago High School product is now a student at Florida Atlantic University (FAU)  after spending two seasons at Auburn.
Switch
She confirmed that her reason for transferring was to be close to her coach Henry Rolle, who is now based in the sunshine state with his new MVP International Group.
“Yes, it was because of him,” Whyte replied when asked about the transfer.
“I have come such a long way with him and he knows how to get the best out of me even with the numerous injuries that I have been having.”
Rolle, who was the head coach at Auburn for more than two decades, has guided a number of Jamaican sprinters to international prominence, including Kerron Stewart who won a silver medal at the 2008 Beijing Olympic Games.
“He is not the coach at FAU but he is the voluntary coach,” the 21-year-old explained.
Whyte opened the Indoor season with 7.36 seconds in the 60 metres two weeks ago.
“I only started sprint workouts a week before I competed so I still have time to really get ready for the season,” she explained.
Whyte also ran her personal best in the 200m, 22.58, last season.