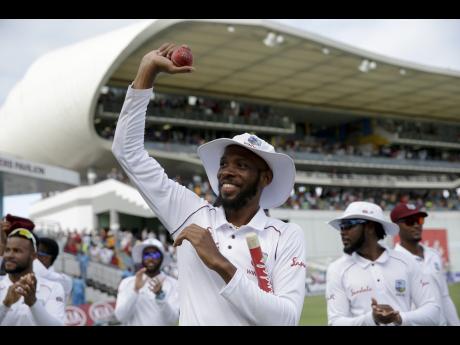 Interim head coach Richard Pybus believes Saturday’s emphatic 381-run over England in the opening Test here has provided a glimpse of what the future holds for West Indies.

Written off before the start of the three-Test series, the Caribbean side stunned the English by outplaying them over all four days of the affair at Kensington Oval, to come away with an amazing victory with a full day and half a session remaining.

“I think when you turn up and you deliver your game plans and you execute it really well with precision, it gives you an understanding of possibilities and what you can do down the line.

“They really turned up, they kept their focus, what we looked to do strategically, they did. I think that’s all credit to Jason and how he led the team and the boys.”

England resumed the final day on 56 without loss in search of an improbable 628 for victory, and reached lunch on 134 for two. However, four wickets tumbled in the second session as they lost their last eight wickets for 112 runs to be dismissed for 246 in their second innings.

Part-time off-spinner Roston Chase spearheaded the hosts attack, snatching eight for 60 in a brilliant 21-over spell as only opener Rory Burns with 84 showed any resistance before falling in the final over before lunch.

“He (Chase) was wonderful today. I just think the pressure created by the bowling unit was great,” Pybus explained.

“You have four good quick bowlers. Roston bowled exceptionally well, his control was good, [there were] good fields, [he] built up a huge amount of pressure throughout the day and just his control and consistency. That will give him a huge amount of confidence going forward.”

He added: “I think collectively as a unit they complimented each other, managed to put together good waves of pressure. Interestingly on the fourth day we thought it would go up and down a little more than it did.

“But the quicks were good and I just think that the amount of pressure that was built up – I don’t want to say Roston didn’t bowl well; he bowled exceptionally well – but when you’ve got pressure from both ends it’s pretty tough for the batters.”

West Indies entered the Test with a cloud of controversy hanging over them following the controversial naming of Pybus as interim head coach.

His appointment led to public bickering between Cricket West Indies directors and a call from one for the decision to be rescinded.

But Pybus said the issue never made its way into the team unit so there was no need to get players focussed.

“We just got on with it. It wasn’t a discussion, we knew what we wanted to do. I think the noise was outside – it certainly wasn’t inside,” he said.