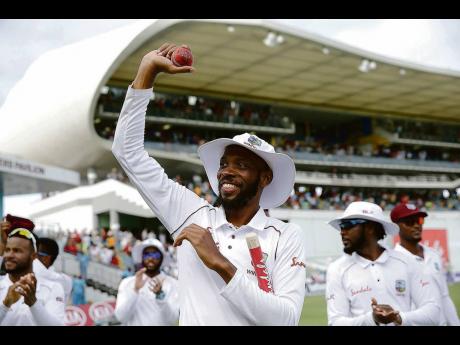 Whether or not last week’s big West Indies victory starts a new era of dominance in Test cricket for the regional side, it provided relief for the fans in the Caribbean. In a game that matched mammoth scores with minimal ones, the West Indies damaged England at the start of a Test series that was expected to reinforce the world order in the gentleman’s game. It’s why we don’t play sport on paper.

To hear some talk about it, the first-innings score of 77 by England smacks of that team’s relative unpreparedness for Caribbean cricket. If that is so, the second Test, which starts today, and the third Test will rebalance things. For now, the home side is on top, and that isn’t to be taken lightly.

A win by 381 runs and a big- wicket haul of 8 for 60 by Roston Chase show that despite all the tough times, there is some life in West Indies cricket. The widespread Caribbean joy at the result tells a story, too. The game is still critically important to the people of the region drawn together by history.

Cricket is one of four sports Jamaica must attend to. In my view, every effort must be made to keep track and field athletics operating at a high level in the post-Usain Bolt era, to continue the success we have enjoyed since the 1948 Olympics.

On my list, too, is football which truly is a community sport occupying the minds and time of young men on an islandwide basis. In the best circumstances, it teaches the value of teamwork, and in today’s world, it can be a boy’s route to financial success from a humble kitchen.

Finally, we have unfinished business in netball. A fine team is rising now as evidenced by a silver medal won at last year’s Fast 5 world tournament – where defender Shamera Sterling was the MVP, and the bronze medal in the Commonwealth Games.

I can’t speak for you, but I yearn for the day when Jamaica wins the Netball World Cup and moves up from multiple third-place and fourth- place finishes. The Sunshine Girls have been among the best for as long as I can remember without being the Netball World Cup champions. That can’t be allowed to continue. Naturally, cricket, football, athletics, and netball compete with other sports for money and expertise. They have no divine right to those resources and yet because of their proven ability to swell national pride and to inspire confidence in all Jamaicans everywhere, it makes sense to invest in that big four.

Next on my list would be swimming. Alia Atkinson has operated as a world record-setting, world title-winning Lone Ranger. In truth, weak swimming infrastructure here and the benefit of high-class competition overseas have meant that she wouldn’t have been a success if she had stayed home.

Jamaica clearly needs world aquatic centres in Cornwall, Middlesex, and Surrey, with great teams of swimming experts to bring forth future prospects. Added to that, more children need to learn to swim. If that doesn’t happen, the success we enjoy now will crash at the turn when Alia retires.

For now, the good times are here in cricket. From a development perspective, you have to hope that the West Indies hold their own in the rest of this three-Test series and build momentum. That would galvanise support for the game that brought so much pride to the region in a bygone age.