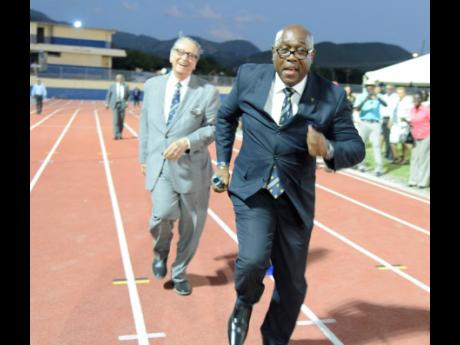 The installation of a new athletics facility has energised all involved in track and field at Jamaica College (JC). Team manager Ian Forbes says the athletes, coaches and the squad’s managers are all now highly motivated. He also expects that the new Ashenheim Stadium will host evening events in the near future.

Speaking at the official opening of the new facility on Wednesday, Forbes said: “The boys are motivated, the coaching staff, the management team are motivated.”

Mindful that his school last won the Boys’ Championships title eight years ago in 2011, he confirmed: “Everyone is motivated to do well, and this will certainly spur them on to higher heights, greater performances, which we anticipate will culminate in something special very soon.

“Track and field is high on the priority list. In fact, all sports, and of course you know, there are the glamour or the premier sports, the track and field, football, cricket, basketball, but we try to facilitate each and every boy that comes through the gate of Jamaica College,” he responded, when asked if the JC family was now paying special attention to athletics.

Since winning in 2011, Jamaica College have finished third at the ISSA/GraceKennedy Boys and Girls’ Athletics Championships on six occasions and second in 2013. During that period, the school has dominated schoolboy football with five straight Manning Cup/Olivier Shield doubles, garnered from 2013-2017.

Forbes, a prime mover in the drive to establish the facility, revealed that the school will continue to prepare representatives in a wide range of sports.

“Not everyone will be a fast or a long runner or a great footballer, but each boy should find their niche here in sports, so we’re looking at total development”, said the JC past student, who also manages the school’s football team.

Overjoyed at the opening of the world-class 400-metre, 8-lane facility, Forbes related, “It was a dream which we envisioned a number of years ago and we have worked towards it, and thankfully, the Ashenheim family has come in. They are the major benefactors, and for that we are very thankful.”

The opening ceremony peaked with the activation of an impressive lighting system that will enable Ashenheim Stadium to host evening events. Even so, the school’s neighbours need not worry about glare from the 189 Old Hope Road compound.

“There is the term called ‘glare trespass’ which pretty much means when you turn your lights on, it’s disturbing the neighbourhood or the community”, he explained. “Each bulb has a specific spot within the facility so there is no light spillage outside, so it’s very efficient, energy-efficient as well, LED, and of course, it will facilitate events being held here at night which can be televised as well.”