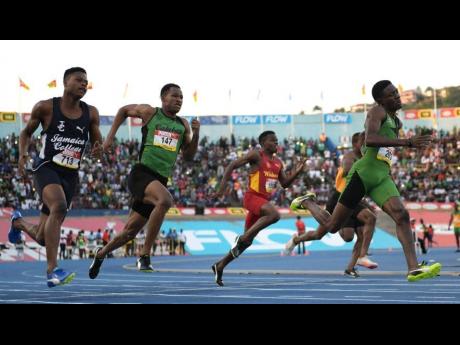 Ricardo Makyn
Christopher Taylor (right) of Calabar High School on his way to winning the Class One boys’ 200m final of the ISSA/GraceKennedy Boys and Girls’ Athletics Championships at the National Stadium on Saturday, March 24, 2018. 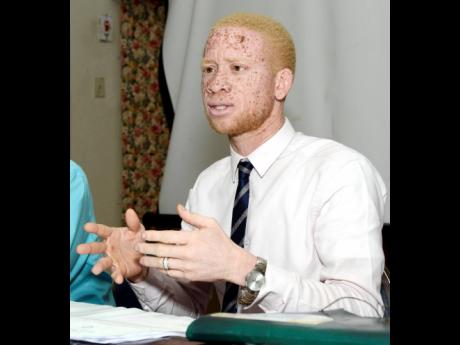 There is much more than meets the eyes and ears in this saga involving the head of the physics department at Calabar High School, Mr Sanjaye Shaw, and two of the school’s top track athletes, team captain Christopher Taylor, and sprint hurdler DeJour Russell. The genesis of this bizarre controversy was reported to be a dispute over the use of sponge mattresses between members of the track team and Shaw, whose physics students also had a camp at the school at the same time as the track team last December.

Having heard the details of the incident from the teacher’s perspective, as well as the video released, there was conspicuously no direct evidence of a physical assault. There was a verbal exchange between the teacher, who narrated his filming of the event, and a group of students that included Russell and Taylor. Certainly, from the exhibits, there was no proof of anything earth-shattering, certainly not in keeping with the stories told by the teacher. The most poignant fact of this particular matter to date is that Calabar did act by suspending both Russell and Taylor for one week for their part in the incident, as was its prerogative, right, and responsibility.

The logical questions are, therefore, what more does this teacher want to achieve from this grand washing of dirty linen in public? Why now, on the eve of Champs? His rhetoric on the narrated video of his physics camp gives a good indication.

“Look at the difference between the physics camp and the tracks camp, we have (physics students) sleeping on desks and more desks, while we have guys sleeping on double beds and triple beds in the track and field camp.”

As he switches the focus of the camera to the track team, the narrative changes.

“Look at the behaviour (of the track students), look at their behaviour.”

That was the sequence that led to the confrontation. It is up to the discerning mind to read between the lines and pick the sense out of this nonsense.

My checks on the matter suggest that this mattress controversy is a mere index of some bigger, wider, and deeper issues that go well beyond 61 Red Hills Road. The not-so-silent elephant in the room is the fact that almost all high schools with vibrant and successful sports programmes encounter this undercurrent of jealousy for the inordinate amount of funding, accolades, attention and status these sports stars attract and enjoy relative to the general school and staff populations.

There is very often a suppressed resentment to the real and perceived preferential treatment of the sports stars within many of these school communities. This current saga emanated from the precise sentiment that something is inherently wrong, with hundreds of millions of dollars being spent on a track and field programme, or a Manning Cup programme, while other areas of the school, such as physics and chemistry laboratories, struggle with a shortage of basic equipment and support. It is quite instructive that Shaw is the head of the physics department at Calabar.

This is by no means a new phenomenon, nor is it exclusive to Calabar. I remember vividly when as a schoolboy footballer, the members of the team were routinely dragged before the principal for no other reason but to be reminded that although we strutted around the campus as if we owned the school, the money being spent on football was wasted money, and footballers do not run the school.

It is even more challenging for the likes of Shaw at a school like Calabar, where the sports programmes are so well funded and have such high profiles. Some of these athletes are national representatives and school ambassadors with international status. The traditional values and sentiments of the likes of Shaw could be easily overrun by those realities.

We need to call out this situation for what it is. Beyond the yet-to-be-substantiated allegations, this is another manifestation of the age-old conflict between the traditional, old-school educator and the high-profile student athletes, and was never really and truly about sponge mattresses.