Jamaica’s coaches among the best – US scout 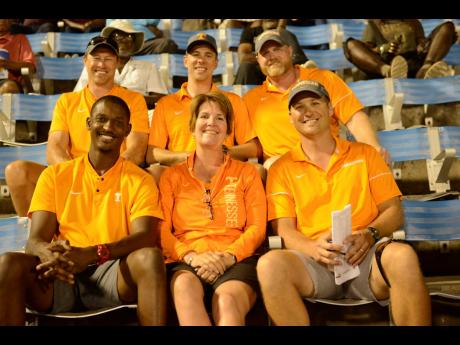 Shorn Hector/Photographer
Ken Harnden (back left), assistant track and field coach at the University of Tennessee and other members of the university’s coaching and scouting staff enjoy action at the ISSA/GraceKennedy Boys and Girls Athletics Championships at the National Stadium.

Assistant track and field coach at the University of Tennessee Ken Harnden says that Jamaica is ahead of most of the developed world with regard to its high school coaches.

Harnden is part of the university’s six-member scouting team currently in Jamaica at the ISSA/GraceKennedy Boys and Girls’ ‘Athletics Championships at the National Stadium, looking at possible recruits for the school.

He said he has visited the island on numerous occasions and notes that the talent on display has always impressed him, leading to his praise for the coaches of these student-athletes.

“One of the great things about coming to Jamaica is the high-school coaching,” Harnden said. “One of the areas where you’re ahead of the developed nations is that the coaching is at such a high level.”

Harnden said that because there are so many good prospects to scout, he and his team have to watch the action over the five days of competition to ensure that they pick up the right prospects.

“We don’t want to come in and get an athlete that has peaked already,” he said. “The talent level here is at an extremely high level. So we’re here to watch them and make sure we’re recruiting the right people.”

Harnden said that it is possible that some of the athletes displaying good performances may already be giving of their best at a young age. For this reason, it is important to assess them to ensure that they would still be capable of a high level of performance not only when they get to the collegiate level of competition, but also in their subsequent professional careers.

“We’re looking for high-level athletes who can do multiple events. Not only that, but we’re looking at athletes who we feel still have some room in their ceiling (for development), who haven’t been coached to their peak yet and there’s still something left.”