A gift for mom! - Discus champ Donaldson dedicates win to her mother 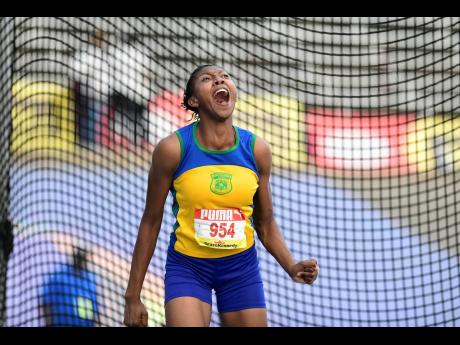 Gladstone Taylor
Gold medal winner Shamella Donaldson of Rusea’s High reacts during the Class One Girls discus final at the ISSA/GraceKennedy Boys and Girls’ Athletics Championships at the The National Stadium yesterday. Donaldson won with a distance of 50.70 metres. 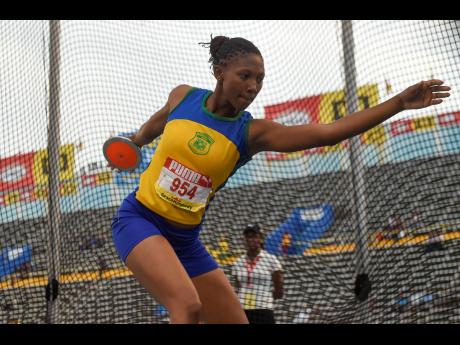 The 19-year-old Donaldson won the event with 50.70m, which placed her comfortably ahead of Adrienne Adams of Excelsior, 47.32m, with Marie Forbes from Vere Technical taking home the bronze medal with a best mark of 46.94m.

Donaldson, who is also the western champion, told The Gleaner after her gold-medal-winning performance yesterday that she was delighted with the result and hoped it would help to inspire her schoolmates.

“I would like to dedicate this medal to my mom because she is having a birthday at the end of this month, and so this is a present for her,” said Donaldson.

“She, along with my father, was in the stands watching me, and so I am pretty sure that they are very proud of my performance.”

“Me and mom are very close because she is like my best friend, and she and my dad are very supportive of me, and so I am just happy right now,” Donaldson added.

The soft-spoken Donaldson, who won a bronze in the event last year, added that she was very confident of victory this year around.

“I am so grateful and overwhelmed for this because last year I finished third, and so I knew that this would have been my year,” said Donaldson, while noting that she was disappointed that she wasn’t able to get the record mark of 53.04m, which is currently held by former Edwin Allen athlete Fiona Richards.

“I wanted to get the record, but things happened in the event, but I am very grateful for 50.70m. I trained very hard for this, and I also made a lot of sacrifices, and so I am happy that I won the event,” said Donaldson, who admitted that she was a little surprised by the lack of competition.

“The event wasn’t that competitive. Honestly, I expected a lot more competition from my opponents in the event,” she said.