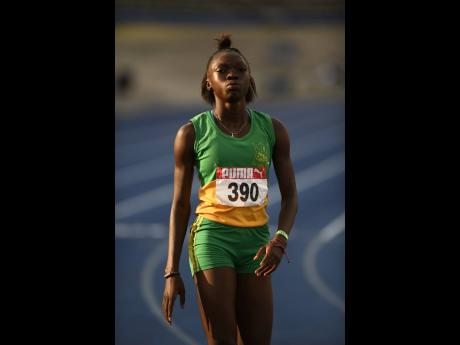 Shaquena Foote has scored points aplenty for Petersfield High School at the ISSA/GraceKennedy Boys and Girls’ Athletics Championships. Until today, those scores have come in the middle-distance events. Yesterday morning, Foote began her quest in a new event, the 400 metre hurdles, at the 2019 staging of the biggest high-school track and field meet in the world.

In front of a sparsely populated National Stadium grandstand, she overcame a shaky start to win her opening heat in 60.08 seconds. Foote, last year’s winner of the Class 2 800 and 1500 metres, ran clear of St Jago’s Rosalie Cooper, 60.41 seconds.

Drawn to the event when she saw teammates trying it at training, Foote has the leading high school time of the season at 58.0 seconds flat. Her coach Machel Woolery thinks her prospects are golden for today’s final.

“Once she gets the rhythm that we’ve been working on and she executes how we execute, she will win comfortably”, Woolery said assuringly.

The other heats were won by Johnelle Thomas of St Catherine High and Lashanna Graham of Edwin Allen with times of 60.03 and 58.51 seconds, respectively.

Foote has notched easy victories in every 400-metre race she has run, with her fast time coming at the Youngster Goldsmith meet in early February. Woolery has prepared her for closer races.

“At no point in time when she’s run so far this season, she got challenged running the hurdles. Well, that’s good and bad”, the coach considered. “We’ve been through the whole pressure system and people running on her, so she says she’s got it.”

Athlete and coach are using the hurdles venture as preparation for the 2020 IAAF World Under-20 Championships.

“We definitely want to win World Juniors next year in one of three events, hurdles, 400m or 800m, and we are making sure we cover all the bases this year; that she chooses wisely next year, and not all over the place,” Woolery declared.

Though she is the island’s fastest girl at 400 metres with her early-season clocking of 52.26 seconds, Foote is also entered in the Class 1 800m. She is also favoured there after her victory over Charokee Young of Hydel High School at the G.C. Foster Classic on March 16. Young won at Boys and Girls’ Championships last year.