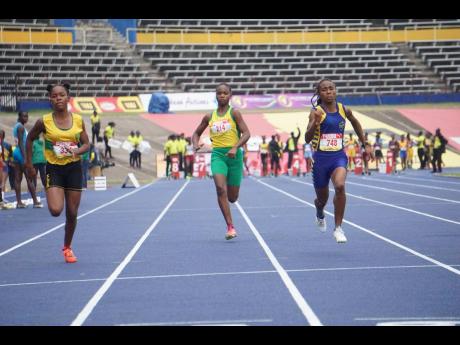 Edith Dalton James High athlete Sanoya Douglas is still basking in the experience of competing at the ISSA/GraceKennedy Boys and Girls’ Athletics Championships at the National Stadium yesterday.

The 13-year-old Douglas, who is the only female athlete to represent the school at the championships, competed in the girls’ Class 4100 m, where she failed to advance to the semi-finals of the event.

However, despite this, Douglas told The Gleaner that she is grateful for the experience of competing at the championships for the first time in her career, and she is already looking forward to next season when she hopes to do much better.

“I feel great because I finally achieved my goal of competing at Champs, and I am looking to working even harder next season, so that I can make it to the final,” said the soft-spoken Douglas.

“It is a great feeling to know that I am the only female athlete to represent my school at Champs, and I went out there and did my best in the event,” she said. Edith Dalton James’ other competitor at the championships, Nicholas Newby, failed to make it to the semi-finals of the boys’ Class 2 200m.

Douglas equalled her personal best time of 13.90 seconds to finish sixth in yesterday’s 100m heat, but her time was not good enough to take her to the next round of action.

She is, however, determined to use the experience as a motivation factor going forward.

“It feels good to know that I have talent and I just bring it out there and show everyone that we can compete with the best athletes at Champs,” said Douglas, while adding that she has been getting a lot of support from her parents.

“I am looking forward to great things next season, because I know that I have the talent to do it,” Douglas said.

“My parents are the biggest motivator in my life, because they gave me the confidence to show that I can do it; and I think I went out there and made them proud, as my mother was in the stands watching me,” she said.