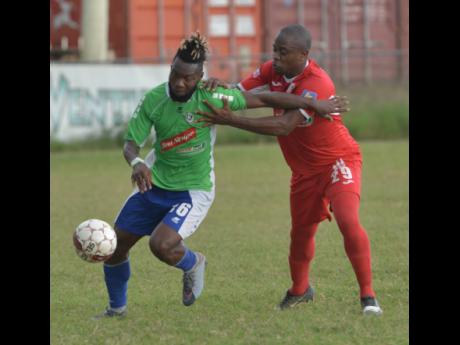 Jamaican Brian Brown netted his fourth goal of the season to help lay the platform for an easy Reno 1868 FC win, but fellow countryman Owayne Gordon dashed those hopes by setting up one goal and scoring the equaliser in injury time as OKC Energy FC snatched a dramatic 3-3 draw in the United Soccer League championship.

Playing at the Greater Nevada Field in Reno, the hosts appeared headed for an uncomplicated victory, up 3-0 after 70 minutes courtesy of a goal from Brown in the 29th minute and second-half strikes from Seth Casiople (51st) and Sam Gleadle (56th).

However, OKC started their comeback when Alexy Bosetti scored in the 72nd minute after slotting home Trinidadian Cordell Cato’s squared pass inside the 18-yard box.

With hope all but gone in the second minute of stoppage time at the end, the 27-year-old Gordon raced down the right and slipped a through ball for Christian Eissele to convert from close range.

And with virtually the last kick of the contest, Eissele chested down Bosetti’s pass into the path of Gordon, who escaped his marker Duke Lacroix to bundle the ball into the back of the net.

With the point, OKC moved into sixth on seventh points in the Western Conference, while Reno lie seventh on six points.

Brown had earlier put the hosts ahead nearing the half-hour mark with his second goal of the season when he unleashed a strong low drive from just outside the 18-yard box to beat goalkeeper Codi Laurendi to his right.

The strike gave Reno a 1-0 lead at half-time before five goals were scored in an eventful second half.

In League One, Jamaican Richard Dixon’s strike deep in injury time at the end was not enough to prevent Chattanooga Red Wolves FC from a 3-2 defeat to North Texas SC.