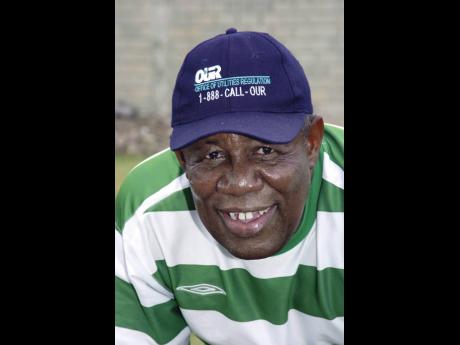 Santos FC again reproduced their trait to thrive on adversity when they defeated Rockfort FC 2-0 in the Magnum JN KSAFA Super League Constant Spring in the first match of a double-header on Saturday.

Victory lifted Santos off the bottom of the Zone B standings to eight points, the same as Mountain View FC and Rockfort FC. With four of the six teams set to advance to the quarter-finals and the last-placed team set for demotion, the Carlton ‘Spanner’ Dennis-coached Santos produced a determined effort to fight off Rockfort and improve their chances of surviving the drop.

Clive Jarrett gave Santos the lead at the 37th minute and Sherton McPherton settled the issue by finishing a corner kick with a superb volley from the top of the 18-yard box with the clock reading 90+3 minutes.

“Last year it was the same thing, our back was against the wall. I came back here and I said to them, ‘we’ve two games and we must get the points we need to stay up’. And I must commend the team, they really fought today,” said Dennis.

He added: “But it’s a history with us and Rockfort. If they beat us the first game, you know we’re going to take the second game; and we turned up here today with 13 people, one man was injured and we had to make changes. I must commend young Gavin Burton to go to centre half and play an outstanding game. The youth them played like their lives depended on it, I’m really proud of my youth them today.”

Leaders Central Kingston, Brown’s Town and third-placed Boys’ Town are already in the quarters. However, the bottom three can swing in any direction depending on the result in their final preliminary match.

“It’s not done. Brown’s Town already qualified, and if we win that game we’re in the quarter-finals, so we’re giving it our best shot,” said Dennis. “We’re well motivated now, so we’re going to give it a shot.”

Rockfort, in the meantime, were left to bemoan their failures after creating enough chances to win.

“I told my team before that it’s a derby game … Santos is in the relegation zone, so they’re coming hard and it will be more motivation for them,” said Clive Brown, head coach of Rockfort FC.

“I’m feeling disappointed because we created chances, we just didn’t score. At the end of the day, they say with hard work everything is possible; I guess we didn’t work hard enough,” said Clive Brown, Rockfort FC’s coach.

“We played well enough to win, we got quite a few chances, one on one with the goalkeeper and still didn’t score. At the end of the day, it’s all going to come down to who’s going to take their chances. As you saw in a game like this, Santos barely had a shot on the goal and they won.”

Brown added: “It’s still not a long shot for us, we still can make it to the quarter-finals, we’ll have to hold down our head and play like how we know we can play, and try to do better next time. We just need to work on scoring goals, we do everything else efficiently, but we’re just not scoring goals, so that’s one of the major problems.”

Meanwhile, Saturday night’s second game, a cross-zone fixture between Meadforest FC and Real Mona FC, ended goalless. Both Zone A teams have already qualified for the quarter-finals and their positions remain unchanged, with Real Mona FC (17 points) second and Meadforest (13) fourth. Barbican lead with 23 points, with Molynes United third on 14.