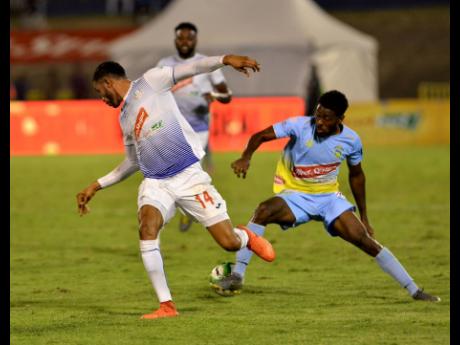 Portmore United secured their second straight hold on the Red Stripe Premier League (RSPL) title after a hard fought 1-0 win over Waterhouse in the final at the National Stadium last night.

Ricardo Morris netted the lone goal for the champions in the 57th minute.

Portmore now joins Arnett Gardens as the only teams in the country to have won back-to-back Premier League titles. It is also Portmore's fourth straight final appearance since being promoted back to the RSPL.

Morris, who has featured in all four finals, stunned the Waterhouse fans at the National Stadium with a beautiful 25-yards curling left-footed shot which went like a past Waterhouse goalkeeper Diego Haughton.

However, a few minutes later, Waterhouse’s striker Andre Leslie came close to giving his team the equaliser, but his powerful shot from 20-yards out was turned behind for a corner by Portmore goalkeeper Shaven-Sean Paul.

However, the match was halted for more than 10 minutes after angry Waterhouse fans hurled bottles unto the field around the 80th minute after disagreeing with a call by FIFA referee Odette Hamilton.

Both teams then ended the match with 10 men after Waterhouse's Rafiek Thomas and Portmore's Damian Williams were sent off for fighting.

Earlier in the evening, Cavalier secured third place after a hard-fought 1-0 victory over Mount Pleasant Academy in the opening match of the double-header.

Midfielder Alex Marshall netted the lone goal of the match for Cavalier in the 41st minute.