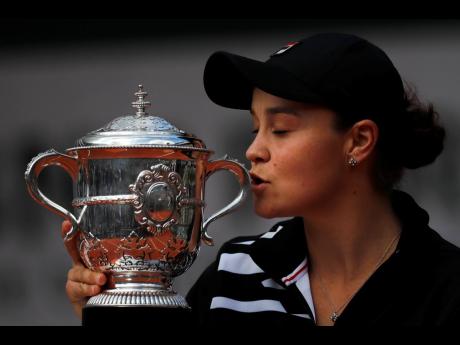 Michel Euler
Australia’s Ashleigh Barty kisses the trophy as she celebrates winning her women’s final match of the French Open tennis tournament against Marketa Vondrousova of the Czech Republic at the Roland Garros Stadium in Paris, France, yesterday.

Ashleigh Barty knew she needed a break from tennis, from the pressure and expectations, from the week-in, week-out grind. So she stepped away in 2014 and wound up trying her hand at cricket, joining a professional team at home in Australia.

After almost two years away, Barty was pulled back to the tour. Good choice. Now she’s a Grand Slam champion.

Taking control right from the start of the French Open final and never really letting go, the No. 8-seeded Barty capped a quick-as-can-be rise in her return to the sport by beating unseeded 19-year-old Markéta Vondroušová of the Czech Republic 6-1, 6-3 yesterday for her first major championship.

“I never closed any doors, saying, ‘I’m never playing tennis again.’ For me, I needed time to step away, to live a normal life because this tennis life certainly isn’t normal. I think I needed time to grow as a person, to mature,” Barty said.

And as for why she came back three years ago?

“I missed the competition. I missed the 1-on-1 battle, the ebbs and the flows, the emotions you get from winning and losing matches,” said Barty, who will jump to a career-best No. 2 in the rankings tomorrow behind Naomi Osaka. “They are so unique and you can only get them when you’re playing and when you put yourself out on the line and when you become vulnerable and try and do things that no one thinks of.”

That last part is an apt description of how she approaches each point, looking for just the right angle or speed, understanding where an opponent might be most vulnerable at any given moment. After using her slice backhand, topspin forehand and kick serve to do just that to Vondroušová, she called it a “kind of ‘Ash Barty brand’ of tennis”.

“She’s mixing things up. And she has a huge serve,” Vondroušová said. “So it’s all, like, very tough to play against.”