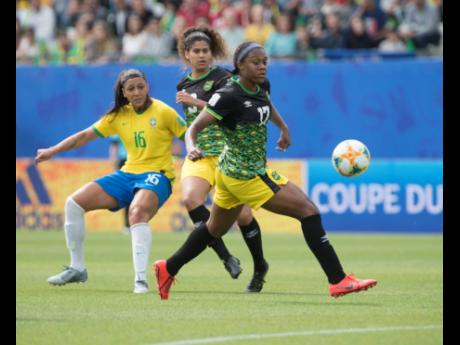 The Jamaicans had some bright moments throughout the contest but were, in the end, undone by Italian striker Cristiane Girelli, who scored a hat-trick, while Aurora Galli added two, to give the Italians their second consecutive win in the group, in the process, handing the Jamaicans their second straight loss in as many games.

Swaby, who plays for Italian club AS Roma, believes that with more opportunities, this team could have had better results at the tournament and argued that the team, essentially, entered the competition with one hand tied behind their backs, given their limited preparation in the build-up to their World Cup debut.

The Jamaicans were only brought together a few weeks before the tournament started on June 7, compared to Friday’s opponents, who spent two weeks of every month together in the national programme for much of the last year and a half.

Additionally, Italy’s players also spent the last two months in camp and played nine friendly internationals before their first match at the World Cup compared to the Reggae Girlz’s five.

“A team like Italy is incredibly organised, and you can only be organised when you have time together and adequate preparation,” Swaby said. “We made our best effort to get training camps in before this World Cup, but we are still behind the curve in terms of how many hours we spent together as a team in training. Looking forward, hopefully, we will get to have camps regularly so that we don’t have to build something for six months when others have been working together for years,” Swaby said.

The 22-year-old said she was extremely disappointed with the result but stated that the team must focus on closing out their World Cup experience with a strong performance against Australia in their final group game on Tuesday at the Stade des Alpes in Grenoble.

“It’s obviously a disappointing result. We really put the time in to execute better today (Friday), but they were the better team, and sometimes things just don’t go the way you expect them to,” Swaby said.

“I am proud of our effort, and we have another game that we can still make a huge statement in, so everything has to be focused on looking forward,” she added.