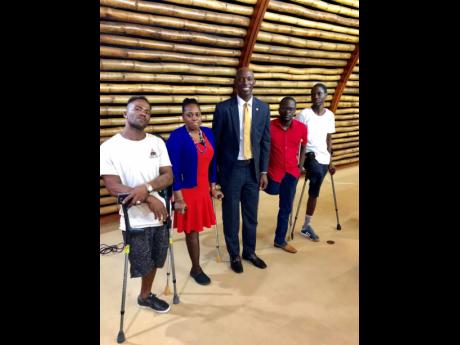 In an effort to motivate fellow amputees, the Jamaica Amputees Football Association (JAFA) is looking to create a team to compete internationally, as it believes that this will provide a better showcase for its players.

Following in the footsteps of the Haitian national amputee team which came into existence after a magnitude 7.0 earthquake which left many citizens disabled, members of JAFA say a football team would show Jamaican amputees that they are more than their disability.

“My philosophy is that my disability does not limit my abilities,” JAFA’s sole female member , Annetta Garwood, said. “This team, if given the right exposure, will show others who feel they are not ‘normal’ or as able-bodied that they can still be active and have fun.”

Speaking at the Diaspora Conference in Kingston on Wednesday, mayor of the city of Miramar, Florida, Wayne Messam, announced that he will be integral in assisting the team achieve its dreams.

Partnering with the Ministry of Sport, Messam says his aim will be to get the Jamaican amputee players to participate in the National Amputees League and possibly advance ever further to the amputees’ World Cup.

“When you see the videos of those amputees playing the sport, it is just so inspirational, and it’s such a joy to see that they have not lost their love for the sport and still can play in spite of disabilities.

So I would love to be able to get Jamaica to join that league,” Messam said.

He added that “Just because you may have lost a limb or may not have full ability as everyone else, you still have a purpose in life.

You still can play the sport with love and can bring together people, all over the world, who have similar situations.”

Although they have said that they have enough males on their team to compete against other countries, JAFA is appealing to female amputees to join so they can also compete in the women’s league.

“When we approach women they are either too old, or they said they are not interested in football, or they feel that they won’t be able to play.

“But women should come out and join because it’s a way to motivate others while having fun,” Davin Marriot, a player said.

Marriot also said that integration with the Jamaica Football Federation would help JAFA achieve its objectives.

He said that training is held every Saturday and Sunday at White Marl, Central Village, St Catherine.

He urged everyone interested in becoming a part of the team to attend.