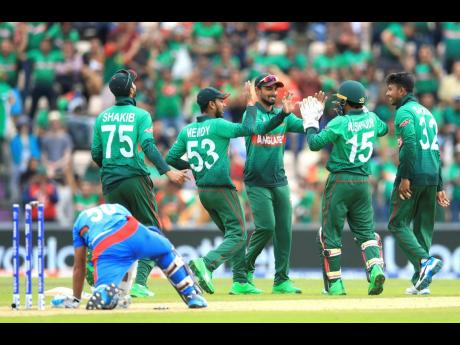 Shakib Al Hasan showed why he’s the top-ranked all-rounder in One-Day International cricket by scoring a half-century and then taking a five-wicket haul to steer Bangladesh to a 62-run World Cup win over Afghanistan.

Shakib moved atop the tournament scoring list with 51, to take his tally to 476 runs, then took 5-29 to lift his tournament wicket tally to 10.

The 32-year-old left-hander is the only player other than India’s Yuvraj Singh who took 5-31 and posted an unbeaten 50 against Ireland at Bangalore in 2011, to achieve the all-rounder double in a World Cup game. Yuvraj was voted player of the World Cup in 2011, when India won the title on home soil.

“I think the five wickets, it was important,” Shakib responded when asked for his match highlight. “Having said that, I had to work really hard for my 50 runs.”

He said he’s never been better prepared for a major tournament, so his performances are “a combination of hard work and luck”.

Shakib was involved from the fifth over yesterday, going to the crease at the fall of Bangladesh’s first wicket. He went on to post his sixth consecutive 40-plus score at the World Cup — he has two centuries — and he was the second-highest contributor to Bangladesh’s total of 262-7 against Afghanistan after Mushfiqur Rahim’s 83. Taking wickets in three different spells, Shakib was the key contributor with the ball as Afghanistan was dismissed for 200, their seventh straight loss in the tournament.

Bangladesh moved to fifth place on the standings with seven points, just one behind top-ranked England and four behind tournament-leading New Zealand.