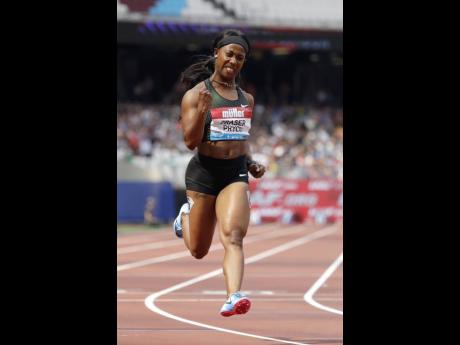 Two-time Olympic gold medallist Shelly-Ann Fraser-Pryce looked indomitable as she sped away to a speedy 10.74-second clocking in the 100m at the IAAF Diamond League meet in Lausanne, Switzerland, yesterday. Fraser-Pryce, coming off a subdued 11.39 seconds at the Prefontaine Classic, refused to allow her previous outing to dictate her performance as she registered a commanding performance in the Swiss city to add to her impressive cache of times recorded this season.

“I came to Lausanne in a very happy state of mind despite a poor performance in Stanford. I am delighted with 10.74 today. Such ups and downs make sure that you do not take anything for granted and do not get complacent,” Fraser-Pryce said after her race.

Her win was the only one on the day among the nine Jamaicans who competed at the Lausanne meet.

Compatriots Stephenie-Ann McPherson and Ronald Levy were the only other Jamaicans to finish in top- three positions in their respective disciplines.

McPherson claimed third place in the women’s 400m after posting a season’s best of 50.88 seconds. Salwa Eid Naser of Bahrain took the pole position with a season’s best and meet record 49.17 seconds, with Niger’s Aminatou Seyni finishing second with a personal best and national record, 49.19 seconds.

Shericka Jackson, the other Jamaican representative in the race, finished eighth in 52.35 seconds.

In the women’s 400m hurdles, former Holmwood Technical High School stand-out Janieve Russell crossed the line in fourth place in 55.13 seconds. The best on the day was American Shamier Little, who finished in 53.73 seconds, claiming the top prize.

Away from the track, the results were fairly similar for Tajay Gayle, whose leap of 8.13m was only good enough for a fourth-place finish in the men’s long jump. Twenty-year-old Cuban prodigy Juan Miguel Echevarria walked away as the day’s winner with his effort of 8.32m.

The Jamaican pair of Shanieka Ricketts and Kimberly Williams had to settle for fourth and fifth with their efforts of 14.65m and 14.52m, respectively, in the women’s triple jump event. The event was won by Colombia’s Caterine Ibarguen, who leaped 14.89m for a season’s best mark.

Daniel Thomas Dodd also placed fourth in her event when her mark of 18.36m was overshadowed by Christina Schwanitz of Germany, who threw 19.04m in the women’s shot put. Perhaps the day’s biggest winner was Noah Lyles from the United States, who posted a blistering 19.50 seconds in the men’s 200m for a world-leading mark. Lyles, who ran 19.72 only a month ago at the Diamond League meet in Rome, has been on a terrific run of form this season.

“The track here is burning up. I’m feeling good here,” Lyles said. “There is nothing better than seeing the accomplishments of what you have put in. Each year I’m making a huge jump. I’m very satisfied.”