Maneater against the clock in None Such Sprint 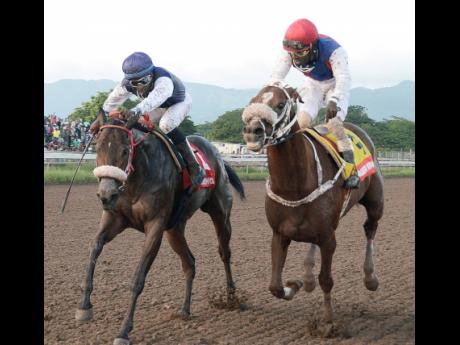 Ian Allen
SHE’S A MANEATER (left) ridden by Omar Walker getting the better of WILL IN CHARGE ridden by Robert Halladeen in the 4th running of the (BURGER KING ) SUPERSTAKES, the 9th race at Caymanas Park on Saturday November 10, 2018.

SHE’S A MANEATER will be racing the clock in this afternoon’s six-furlong None Such Sprint, facing three of her stablemates, along with ANOTHER BULLET and MONEY MAGNET for company, after skipping last week’s Viceroy Trophy at nine furlongs, dodging BIGDADDYKOOL, HOUDINI’S MAGIC and WILL I N CHARGE, who took a nosedive at the start.

Wayne DaCosta’s mare should easily defend her None Such Sprint title despite the presence of ANOTHER BULLET, the shock winner of April’s Lady Geeta Trophy in which SHE’S A MANEATER probably ran the second-worst race of her career.

After spending the last quarter of 2018 competing mainly in mid-to-long-distance events, a worn-out SHE’S A MANEATER wasn’t sharp enough for Lady Geeta, nor had the company of her stablemates as rabbit in a sprint, which left her flat-footed with topweight against quicker rivals, CHACE THE GREAT and WILL IN CHARGE, at six furlongs.

CHACE THE GREAT skittered away on the lead, ran WILL IN CHARGE into the ground, and would have made it home were the race a five-and-a-half furlong event. ANOTHER BULLET, an opportunistic run-on sprinter, first went by WILL IN CHARGE before collaring gasping CHACE THE GREAT near the wire.

Though he’s getting 14lb from SHE’S A MANEATER, ANOTHER BULLET is going up against the most versatile horse in training, who just reeled off 1:05.0 for five and a half furlongs at exercise on Monday, signalling that her only rival will be the clock.

MONEY MAGNET, SHE’S A MANEATER’s whipping girl for the last three years, since their two-year-old days, quickly won two races at the start of this season while the top horses rested up from the rigours of the Gold Cup, Superstakes, Diamond Mile, and Miracle Man trophy.

With the cavalry out in April’s six-furlong Lady Geeta, MONEY MAGNET retreated to the shadows, finishing fifth, two lengths behind fourth-place SHE’S A MANEATER, who is now razor sharp, ready to cut the field to shreds.