Fraser-Pryce: Training with Thompson is a win-win 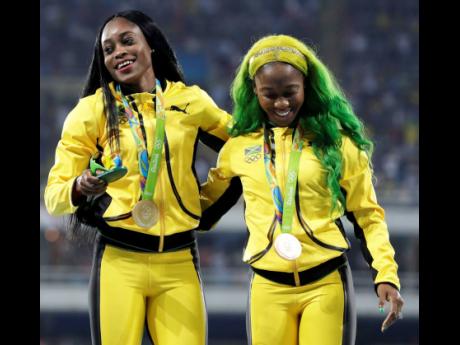 Speed queen Shelly-Ann Fraser-Pryce may have the best training partner in the world in her MVP Track Club teammate Elaine Thompson and she knows it.

Speaking in Switzerland ahead of her impressive 100m Diamond League showing in Lausanne on Friday, Fraser-Pryce described training with Thompson as a win-win situation.

“It’s just good for me to be in an atmosphere where you have a young athlete that is as equally driven as I am,” Fraser-Pryce said. “It keeps you on your toes, and it also reminds you of who you are as an athlete and who you aspire to continue to be because you have younger athletes who want to become Olympic champions, and to be able to train among young athletes who are equally motivated as you is just a win-win situation for me.”

During this second season since her return from maternity leave, Fraser-Pryce has clocked 10.73 seconds in the 100m and 22.22 in the 200.

“It seems we push each other to train harder,” she offered as a reason. “It’s like one of those unspoken things that happens, it’s here or there, but we just know that when we get to the line, we’re just going to train hard and just try to hit the times.”

The 33-year-old Jamaican sped to those fast times at the June 20 – 23 National Senior Championships, pursuing Thompson but reported in Lausanne that the effort left her worn out.

Consequently, she managed eighth place in 11.39 seconds at the Prefontaine meet on June 30.

“I’ve not run for four straight days for the longest while, I’ve not done the double for the longest while, so it was definitely something to get used to, and it was a little tiring to actually do, but I went to Prefontaine, but things didn’t go how I wanted it,” said Fraser-Pryce. Her last big double was in 2013, when she took the 100 and 200 at the World Championships.

Fraser-Pryce signalled a return to her best with a blistering 10.74 seconds win in Lausanne on Friday, leaving her with three of the five fastest times recorded so far this season.

In a look ahead to the rest of the campaign and the 17th World Championships, which start on September 28, she said: “The season is still pretty long, so you just have to gauge yourself and make sure that at the right time, you will get there, but 10.6 is something that I’m hoping that I’ll be able to achieve this year.”