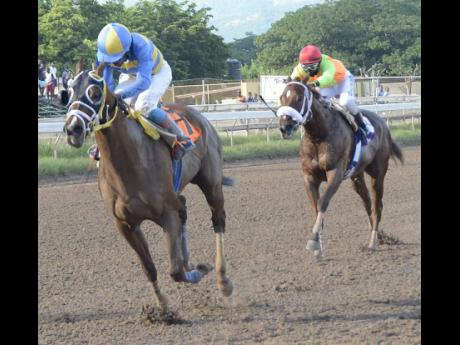 CHACE THE GREAT, November’s Caribbean Sprint winner, who finished ahead of WILL IN CHARGE and SHE’S A MANEATER when beaten by ANOTHER BULLET in April’s Lady Geeta Trophy, is down in class among open allowance runners this afternoon.

At the handicaps, CHACE THE GREAT, running with 121lb, will have to run his worst race in moons to be defeated by either ANOTHER VIGOROUS or PATRIARCH, who are sitting too close in the weights to a grade-one horse, 117lb and 116lb, respectively.

Rubbing salt into a gaping wound in class difference, CHACE THE GREAT gets a plumb draw with hot Mamdeen, post-position four, which keeps ANOTHER VIGOROUS, at stall two, to his inside and PATRIARCH, the other speedster in the event, within catching distance, drawn beside him at stall five.

The last time CHACE THE GREAT raced at five furlongs straight was in January, carrying 126lb, caught at the wire by fellow grade-one campaigner MONEY MAGNET, who won in 58.1.

CHACE THE GREAT should add another winner to Mamdeen’s tally as he continues to dominate the jockeys’ standings, reeling off a three-timer on Wednesday, moving to 58 winners, 14 clear of fellow apprentice, Reyan Lewis.

Meanwhile, trainer Anthony Nunes remains firmly on course to dethrone 18-time title holder Wayne DaCosta, who won Wednesday’s overnight allowance with DYSFUNCTIONAL for a winner’s purse of $546,000, a mere scuff on the $17 million in stakes by which he trails his rival.