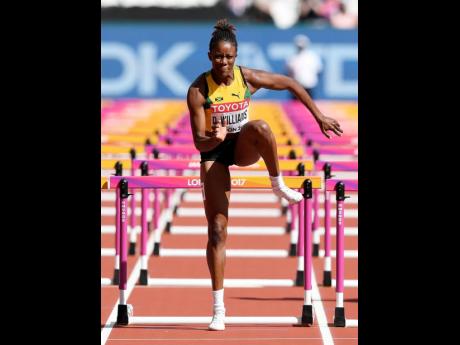 Danielle Williams’ performance at the London Diamond league not only made her the fastest-ever Jamaican woman in the sprint hurdles, it also made her the leader in the Diamond League race, which in itself provides for her an opportunity to earn a wild-card entry to participate in the World Championships later this year.

The Diamond League race seems more significant for the 2015 World Champion after she was ruled out of contention from being selected for one of the three spots given to Jamaica to participate in the 100m hurdles at the marquée event set for Doha, September 28 to October 6.

However, Williams told The Gleaner that her quest to win the Diamond League race is not motivated by a desire to compete at the World Championships.

“Getting the bye to the World Championships would mean something else because everybody knows what happened (at trials) but it wouldn’t take away anything from the season. It would just mean that it didn’t work out, and I would just have to turn my focus to next year,” she said. “Winning the Diamond League race has always been one of the goals since the beginning of the season.”

The former Queen’s School standout was judged to have false-started in the final of the women’s 100m hurdles at the National Senior Championships last month. The race was cancelled after it failed to go off after Williams left the track. The Jamaica Athletics Administrative Association JAAA ruled that its selection committee would select the top three Jamaican performers in the event for the championships but stated that the 26-year-old Williams is not eligible for selection.

However, Williams’ stellar 2019 season shifted to another gear when she ran a season best of 12.52 seconds at the Monaco Diamond League and followed up with a world-leading time of 12.32 in London a week later.

In the midst of concerns among Jamaican athletics fans about the decisions that must be made off the track, Williams and her long-time coach, Lennox Graham, are zoned in and are only focusing on the things that they can control.

“After trials, my thing to her was let’s focus on the things (meets) that we have contractually agreed to, the things that we know are coming and that we can control and deal with that, and that has been our approach,” Graham explained. “Our job is to not get sidetracked by whatever else is happening, but be good professionals and go ahead and do what we have been contracted to do and that is to run the meets that we have been invited to. If we get a bye and we are into the World Championships, then we talk about that. If it doesn’t work out, then we do accordingly.”

More in the tank

Williams, meanwhile, warned that there is more in the tank and believes that she could have gone faster in London if she had done some things differently.

“I think I made quite a few mistakes in that race, so I could have gone faster. I hit the fifth hurdle pretty badly, and that probably shaved off a couple hundredths of a second, and I hit the last hurdle, plus the acceleration off the last hurdle could have been better because it looked like I leaned exactly at the line, and that is not what we practised,” Williams said.

She came into the meet with a 12.49 personal best but quickly erased that in the preliminary round with a 12.41 run before shocking the world with the sixth-fastest time in the event in history.

“I don’t typically know what time I am going to run, but I knew I had it in me to run 12.3 because practice has been going well, and based on the things that I have been doing, I know that it is something that I could achieve,” Williams said.