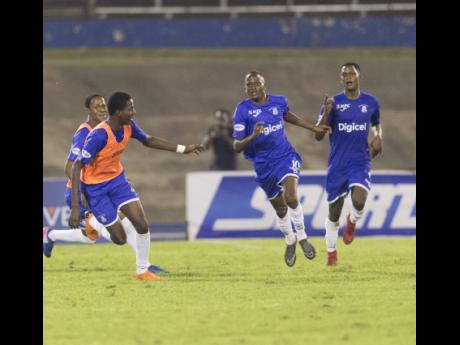 The competition will be played in a round-robin format in the first round, with teams facing each other in 60-minute games, each consisting of 25-minute halves and a 10-minute half-time break.

Four of the five teams will advance to the semi-final round, with the winner of each semi-final advancing to the final at 4:30 p.m. tomorrow.

“Being the fair-play sponsor for the event is important as we hope the boys will showcase the core values of integrity and commitment to purpose,” he said.

“We look forward to serving our community and showing that ‘integrity is doing the right thing, especially when no one is looking.’

TIMING OF THE EVENT

Yardie Sports chief executive officer Dwayne Richards, said the timing of the event was key to its planning.

“We chose the end of July as it gives the coaches approximately one month before the start of the season to do a proper assessment of their respective squads,” he said.

“Football, as we knew, it has changed. Gone are the days where preseason consisted mainly of training sessions and a few games here and there. What we find is that coaches are eager to see where their teams are during the preseason period as they get ready for the September start of the schoolboy football competitions,” he continued.

Yardie Sports is also partnering with the Jamaica eSports Initiative to host a virtual football competition for the schools and the public on Saturday.

Each participating team can nominate one player for the e-football (FIFA) challenge while the first 16 persons from the general public to register will do battle for prizes.

Ludlow Bernard, head coach of Kingston College, is happy for the opportunities the competition provides.

“The Yardie Sports preseason tournament comes at a good time within the preseason within which we are able to rotate our players and have a good look at the options that are available to us,” he said.

The cost for admission is $300 for adults and $100 for children and students with identification cards.