Rough Pan Am start for Jamaica 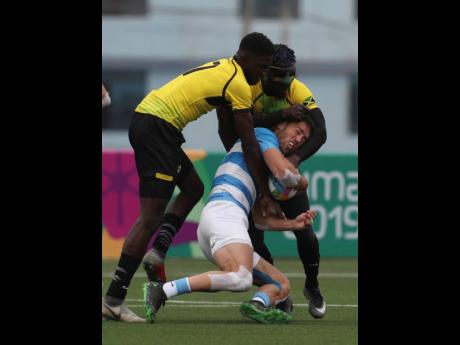 Juan Karita
Franco Sabato (centre), of Argentina, is tackled by Mikel Facey (left), and Oshane Edie, of Jamaica, during their Rugby Sevens match at the Pan American Games in Lima, Peru, yesterday. Argentina won the match 52-0.

Jamaica endured a tough day at the Pan American Games yesterday in Lima, Peru, as the Rugby Sevens team and the squash players were trounced in their respective competitions.

The Jamaica Crocs were soundly beaten by Argentina in their opening game. The team failed to score a point as the Argentines tallied 57. The team needs to get the better of Canada today at 12:40 p.m. to keep their hopes of qualifying for the quarter-final alive. They will close out the group stage against Uruguay at 4:30 p.m.

In squash, Chris Binnie was forced to forfeit the preliminary round of the men’s singles without playing a rally on Thursday night. Chile’s Maximiliano Camiruaga, his opponent, advanced to the quarter-final.

Binnie came back yesterday morning to play the quarter-final of the men’s doubles with Clive Walters, but the Jamaicans were beaten 2-0 by the Mexican pair of Orlando Salazar and Israel Salazar.

Binnie and Walters challenged the Mexicans in the first game as they were edged 11-10, but in game two, they were comprehensively beaten 11-2.

Jamaica’s senior women’s football team, fresh off their participation at the FIFA Women’s World Cup in France last month, will get into action against Mexico tomorrow at 10 a.m.