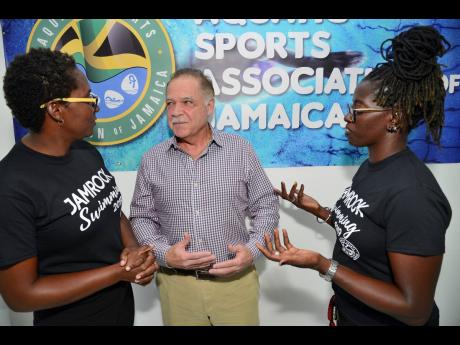 Ian Allen
Martin Lyn (centre), president of the Aquatic Swimming Association of Jamaica, chats with Sophia Whyte-Givans (left), team manager, and Gillian Millwood, head coach of Jamaica’s Swim Team to the 25th staging of the Goodwill Games, which will be held in Suriname between August 16 and 18. The press conference was held at the National Aquatic Centre, Independence Park, in Kingston on Tuesday.

Jamaica will be represented by its full complement of youth swimmers, as 40 athletes from the Youth Swim team will be on their way to the Goodwill Games in Paramaribo, Suriname, from August 16 to 18. This will mark the second time that Jamaica will take part in the event.

In a press conference held yesterday at the National Aquatic Centre, the members of the team, as well as the management staff, were announced, where head coach Gillian Millwood stated the team’s expectations heading into the Games.

She sought to highlight several of her athletes who she believes should put in a determined showing in their respective age group, including the likes of Rianna Scott, Jessica Denniston, Dominic Lalor, and team captains Luke Mair and Sage Sinclair, among others.

Mair said his intentions for the upcoming Games are to simply improve upon his times last year.

“Personally, I’ve been training a lot and I expect to do a few best times in my events, and hopefully if everything goes well, I can get some medals. We’re all hopeful, and so am I,” Mair explained. “The length of the pool has changed; I’m really just hoping to improve my 50m times since my times would have been different in a 25m pool. I’m just looking forward to doing better.”

His female counterpart, Sinclair, echoed similar sentiments but focused on the relay events, where she feels the team has a strong chance of medalling.

“Based on my training, I’m hoping to achieve some best times. I’m looking forward to working with the other members of my team and hoping to medal in the relay events. I think we have a pretty strong team, so I hope we can do well there,” said Sinclair.

The Goodwill Games is a development competition put on by The Bahamas, Barbados, Grenada, Guyana, St Lucia, and Trinidad and Tobago as a way to foster goodwill between member countries. Jamaica made their first appearance last year when they were invited to the meet in Barbados and hope that their performances can facilitate future invitations.