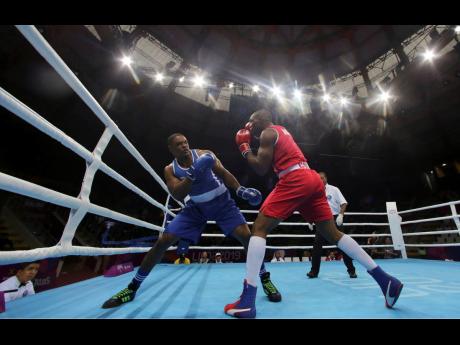 Fernando Llano
Cristian Salcedo of Colombia (right) throws a punch to Ricardo Brown of Jamaica during the second round of their men’s heavyweight 91+kg semi-final boxing match at the Pan American Games in Lima, Peru, yesterday.

The 29-year-old Brown scored bronze in the men’s super heavyweight (91+kg) event despite losing his semi-final bout to Colombian Cristian Salcedo Codazzi. Codazzi won by unanimous decision on points with a final score of 30-27.

However, by virtue of winning Saturday’s quarter-final bout, Brown was already assured of a place on the podium. Semi-finalists are guaranteed medals as there is no bronze-place match in boxing at the Pan American Games.

Brown defeated Honduran Darwin Rodriguez on points in a split-decision 3-2, with the fight scored at 29-28. Codazzi will go on to face Cuba’s Dainier Pero Justiz in the final tomorrow.

Brown’s podium finish is Jamaica’s 12th Pan American Games medal in the sport and their first since Ricardo ‘Surgeon’ Smith took bronze in the welterweight class at the 2007 Games in Rio de Janeiro, Brazil.

It was a rough day in other events as Katherine Wynter was defeated in straight sets by United State’s Iris Wang 21-4, 21-6 in their women’s badminton round-of-16 encounter. Wynter’s fortunes did not improve in the women’s doubles round of 16, where she and her partner, Tahlia Richardson, were ousted by the Cuban duo of Taymara Oropesa and Yeily Ortiz 21-13, 21-11.

Samuel Ricketts was also eliminated by Kevin Cordon of Guatemala 21-15, 21-13 in their men’s round-of-16 match-up.

Jamaica’s men were edged out by Guatemala in the men’s squash round of 16 two games to one. Christopher Binnie got the Jamaicans off to a great start, winning the first matchup against Edwin Enriquez Franco, but team-mates Clive Walters and Anthony Burrowes suffered straight-set defeats to Alejandro Enriquez Franco and Antoni Sedano Muñoz. In gymnastics, Reiss Nelson finished 22nd in the men’s all round final. Brazil’s Caio Souza captured the title, with his countryman Arthur Mariano taking silver and Canadian Cory Paterson earning bronze.

Jamaica will be in action today as the Reggae Girlz look to bounce back from their opening defeat on Sunday when they face Colombia at the San Marcos Stadium at 1:00 pm. Gymnast Danusia Francis will compete in the individual balance beam final at the Villa El Salvador Sport Centre at the same time. Francis placed in the top 10 in Jamaica’s first-ever gymnastic final, finishing seventh.