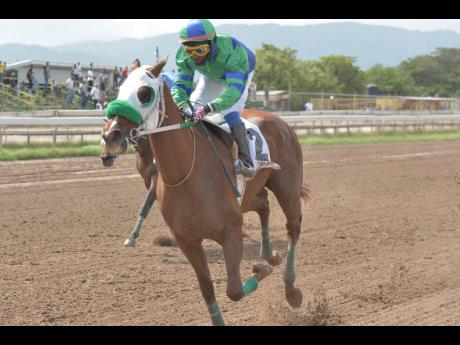 ANTHONY Nunes’ FAYROUZ ran somewhat out of ­character last time out, disputing the lead with UNCLE VINNIE at a mile when both were beaten by out-of-class DYSFUNCTIONAL on July 10, a race which should be thrown out the window by handicappers hunting the winner of this afternoon’s Kenneth Mattis Memorial at 10 furlongs.

FAYROUZ had returned from a near three-month lay-up on July 10, her two previous starts being a sprint in which she had no chance and an open allowance easily won by MASTER OF HALL. Prior to that, she had not raced in nearly four months.

It should also be noted that on July 10, whereas she was unfancied at 8-1, her stablemate, DONTAE, was the 9-5 favourite, short odds directly linked to his previous run, coming off an eight-month lay-up, second by two and a quarter lengths behind stablemate I AM DI ONE at nine furlongs and 25 yards.

Whereas the game plan appeared to be FAYROUZ pressing the lead for DONTAE to close, her stablemate was squeezed for space five furlongs out and, being the one-pacer he is, fell back to eighth at the half-mile.

Though he maintained his margin behind the leaders up to the furlong pole, DONTAE weakened back into ninth, losing seven lengths thereafter, bringing into question his chances against UNCLE VINNIE and FAYROUZ, who both ran strong to the wire but were outclassed by DYSFUNCTIONAL.

FAYROUZ, last year’s Oaks winner, who returned to beat St Leger champion, MARQUESAS, in the Fontainbleu Trophy, coming from behind on both occasions, had no business disputing the lead with UNCLE VINNIE on last. Reverting to her normal running style, at 10 furlongs, having worked reasonably well, should land her in the winners’ enclosure.

Gary Subratie’s stubborn UNCLE VINNIE should be the controlling speed but has an eight-pound swing against him going in FAYROUZ’s favour.

Though Subratie might believe he has a tag team, speedy UNCLE VINNIE and late-running ANNA LISA, her ability to pounce in the stretch run is limited to the reality that she couldn’t pass her own stablemate after he had chased I AM DI ONE all day at nine furlongs and 25 yards in June.

That leaves UNCLE VINNIE having to do his own laundry at 10 furlongs with FAYROUZ now fitter. It will be a tough task for him to escape FAYROUZ, who had allowed him six pounds and is now in receipt of two.