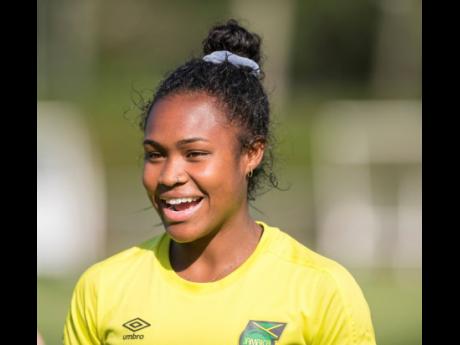 Despite losing all three of their group games, to finish bottom of Group A, Jamaica’s Reggae Girlz ended the Pan American Games football tournament on a positive note after beating host Peru 1-0 at the Estadio Universidad in San Marcos, yesterday.

Mireya Grey scored the game’s only goal after 26 minutes in the seventh-place decider as Jamaica finished second from bottom in the eight-team tournament. But for coach Hue Menzies, gathering experience and exposure for his young players was the main focus, and he believed that they achieved that objective despite the ­unfavourable results.

“Its a good way to end this Pan Am project on the 57th ­birthday of our country. We played a great second half after we made ­adjustments at half-time. We kept possession of the ball, and defensively, we were disciplined,” Menzies surmised.

“We continue to grow our ­programme by giving these young players the experience. That was the main mission, and we ­accomplished it. We got the opportunity to evaluate all the players before selection of the Olympic qualifier roster. Jayda Hylton-Pelaia and Madiya Harriott did well, and both will be in the contingent for the Olympic qualifier selection ­process,” he noted.

“This [tournament] tells that we continue to provide experience for our young players to grow on the international stage, and I am ­satisfied with the experience ­provided. However, we still have to improve on establishing more of an assertive effort collectively,” he added.

The Reggae Girlz lost their opening game to Mexico 2-0 before going down to Colombia by the same margin. In their last group game against Paraguay, they scored their first goal of the tournament but went down 3-1. However, in their final match at the Games, the Caribbean team pulled a surprise to get an unlikely win over the South Americans thanks to Grey’s first-half strike.

Jamaica’s male team will face Panama today at 1 p.m. in the fifth- and sixth-place decider at the same venue. The Jamaicans got their first win of the competition in their Group B closer on Sunday against Peru, with a 2-0 scoreline after a Deshane Beckford brace.