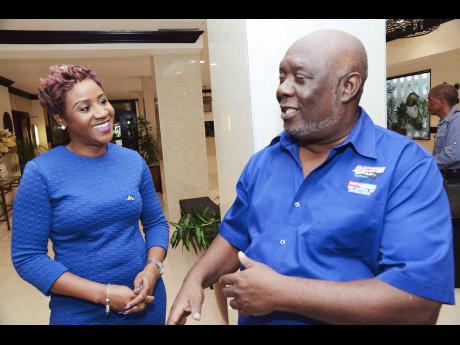 The Racers Grand Prix was on Saturday announced as one of nine meets in the 2020 World Athletics Continental Tour series.

The Continental Tour is a series of the world's best one-day meetings outside the Diamond League.

Racers Track Club founder and head coach Glen Mills, welcomed the development, which was made ahead of next year's fifth staging of the meet.

This is the fifth year of the Racers Grand Prix and over the four years we have provided a meet to Jamaica and the world at a very high level of organisation and performance and we are indeed delighted that we have been recognised by World Athletics," Mills told The Gleaner shortly after the announcement.

Comprising meetings from around the world, the Continental Tour will be divided into three levels – Gold, Silver and Bronze – whose status will be determined by the quality of competition and prize money on offer.

Mills confirmed that the Racers Grand Prix has been given a Gold designation.

World Athletics is investing in the Gold level meetings to increase the number of high quality competitive opportunities available to showcase our sport's best athletes.

Area associations will be responsible for managing the Silver and Bronze level competitions, which will number up to 100 meetings across the globe.

In 2020, the pilot year of the tour, 10 cities will host Gold level series meetings, offering a total of US$2 million in prize money. The series will begin on 10 May in Tokyo in the same stadium that will host athletics competition at the 2020 Summer Olympic Games just 12 weeks later. The 10th meeting for 2020 has yet to be confirmed.

“We are kick starting our campaign to build more quality one-day meetings around the world with the new Continental Tour, which will give more athletes more opportunities to compete across all disciplines, to earn prize money and world rankings points and to build their profiles,’’ World Athletics president Sebastian Coe said. “Between the Diamond League and the Continental Tour all disciplines will be catered for and many more athletes will have access to top-class competition. Those that have not been included in the Diamond League final next year, will be core disciplines on the Continental Tour.”

Host broadcasters have been appointed for each meeting and Infront, the tour’s international TV rights holder, will sell the rights into markets around the world.

A total prize money purse of at least US$200,000 will be offered for each Gold meeting as well as significant World Ranking points.

For the 2020 season's core disciplines - the 200m, 3000m steeplechase, triple jump, discus throw and hammer throw for both men and women - the ranking points will be allotted at the same level as the Diamond League.

Wildcard entry to the World Athletics Championships Oregon 2021 will also be on offer for the best athletes in the core disciplines.

The 2020 Continental Tour Gold events will take place across Asia, Europe and North America, and will include some of the sport's most venerable meetings, which honour some of athletics’ greatest legends.

They include the Fanny Blankers Koen Games in Hengelo, Netherlands, the Nurmi Games in Turku, Finland, and the Skolimowska Memorial in Silesia, Poland. Other renowned meetings on the Tour include the Golden Spike in Ostrava, Czech Republic, the Hanzekovic Memorial in the Croatian capital Zagreb and the Racers Grand Prix in Kingston, made famous by world 100m and 200m record holder Usain Bolt.