Keeping on the right side of the corona fence 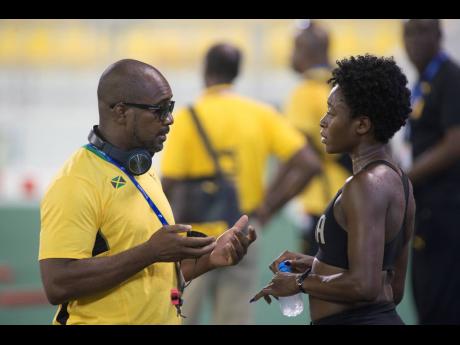 The Pelicans Track Clubs, home of World Championships 400 metres hurdles bronze medallist Rushell Clayton, is being very careful about the risk presented by the coronavirus. According to Pelicans coach Okeile Stewart, his athletes are following the social-distance guidelines to keep everyone in the group healthy.

“We try to maintain even more than three metres apart,” said the man who coaches UWI, Clayton, 2017 World bronze medallist Ristananna Tracey, and 2018 Commonwealth bronze medallist Jaheel Hyde. “We don’t want any of these athletes to be caught on the wrong side of the fence or myself,” he emphasised.

Based at The University of the West Indies (UWI), the group is smaller than it has been because the institution’s Intercollegiate Championships team has gone home.

“The university athletes have gone home because Intercollegiate Championships has been cancelled, so we’re pretty much working with the professionals, which is a much smaller group, a more controlled group, but nevertheless, it has affected how we approach training,” Stewart said on March 17.

The Intercollegiate Championship was set for the National Stadium from April 3-4.

In addition to navigating the health challenge presented by the global spread of the coronavirus, coaches are working hard to keep their charges focused despite swirling uncertainty regarding the season.

“The sad part of it is if there is no championships, then they don’t earn, but one of the things we look at, the good part of it, is that in order to maintain what you have this year, you have to continue to train,” Stewart reasoned.

“You can’t go sit down and get fat and expect next year when everything clears up, we are starting from ground zero. So that’s one of the things we keep talking about. Let’s look at it as a developmental year if the worst should come, and let’s try to get faster. Let’s try to get stronger to build for the future,” the coach postulated with reference to growing doubt about the timely staging of the Tokyo Olympics, which is set to begin on July 24.

Clayton and Hyde, the 2014 and 2016 World Under-20 champion, have raced over a variety of distances so far this year, with Clayton lowering her personal best in the 200 metres and winning the flat 400 at the Gibson McCook Relays. In like manner, Hyde trimmed his 400m best to 46.47 seconds on February 8 at the Camperdown Classic.

Athletics at the Olympics is scheduled to commence on July 31.