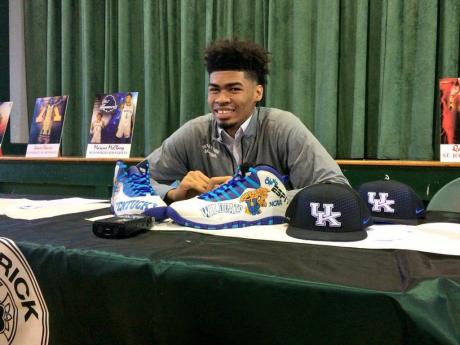 Jamaica College (JC) basketball coach Duane Cunningham has been fortunate to see some of his former players excel through the collegiate ranks.

The path starts with teaching the basics to new students, and Cunningham says this should not be shortchanged.

“What we do at JC is that we try to get the guys that just passed the PEP (Primary Exit Profile) exam, in the summer, and we keep a little camp and introduce them to the game there,” Cunningham said. “As someone who knows the importance of that first fundamental lesson of the game, I try to make sure that I don’t cut corners with that group.”

He says that the early focus on the fundamentals is important to close the gap between them and young players in United States who have been taught the game at an early age.

“When you go up there at age 15, 16, it’s a big gap that you have to cover, and it takes a real tough personality because it’s a rough journey,” he says.

His approach has led to former players landing Division One offers. Among those are Tahj Malik Campbell, a freshman at Morgan State University; Malik Anderson, who will play at Texas Rio Grande Valley University this autumn; and Lawrence Foreman, who recently attained a Division One scholarship to Rider University.

Perhaps the most notable of the group is centre Nick Richards, who played three seasons for Kentucky University of the South Eastern Conference (SEC). Richards was selected to the All SEC first team after averaging 14 points per game this season and was the conference leader in field goal percentage with 64 per cent. His season was cut short with the cancellation of the SEC championship and subsequently the NCAA Men Basketball Tournament, but he is on the verge of a career in the NBA.

Cunningham takes pride not only in the way that the players have managed to pursue their chosen paths, but also in how they are sharing their knowledge with the next generation of players at JC.

“One of the blessings is that all of the guys, they come back and they share,” Cunningham said, “and they keep that fire going [so] that the kids can look up to them and say, ‘Well, I can be like him someday’.”