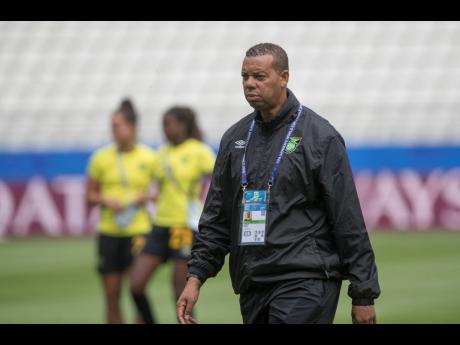 Interim national senior women’s football team head coach Hubert Busby Jr is ensuring that the period of inactivity because of COVID-19 is being used wisely in planning for the future of the programme, as well as facilitating his own personal development.

Busby is in self-isolation in Baton Rouge, Louisiana, to safeguard from the pandemic which has 800,000 cases in the United States. While the virus has disrupted the football calendar in terms of leagues and tournaments, he says he has been utilising the time to hone his craft as a coach, as well as strategising with the staff remotely on how to take the women’s programme forward.

“I can go online and do some more self-help or development courses in terms of coaching, managing, creating positive culture,” Busby said. “[I’m] using this opportunity for me to grow as a coach, to grow as a person, connecting with people, connecting with colleagues to talk about best practices, and then again connecting with my players whenever I can, to see how they are doing.”

Busby’s time spent has included reviewing film from the Under-20 Reggae Girlz’s Concacaf Women’s Championship, praising the team’s performance during the campaign, although the young Reggae Girlz were unsuccessful in qualifying for the now-postponed FIFA Under-20 Women’s World Cup. Importantly for him, however, his constant rapport with his senior players during this time has been more focused on their mental health rather than how they have been maintaining their physical fitness.

“My conversations with them is just to see how they are mentally and spiritually, how they are keeping up, how things are,” he said. “There are a couple of players out of contract, looking to get some opportunities, [I’ve been]working with them in terms of that perspective. I think, at this time [it’s important] seeing how they are as people. From a spiritually connecting level, that’s what it’s about.”