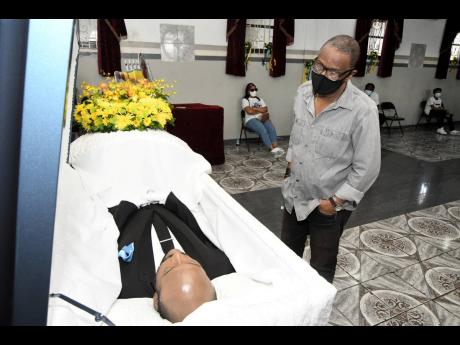 Remembered for his achievements, his impact on his community and his family, the sporting fraternity yesterday said farewell to the late Luton Shelton, former Harbour View striker and the country’s all-time men’s leading goal scorer. A limited...

Remembered for his achievements, his impact on his community and his family, the sporting fraternity yesterday said farewell to the late Luton Shelton, former Harbour View striker and the country’s all-time men’s leading goal scorer.

A limited number of family, friends, football interests, and members of Government gathered yesterday at Fellowship Tabernacle to celebrate the life – a life that was filled with many accomplishments in local and international football – of one of the island’s most gifted sporting figures.

Shelton died on January 22 after a long battle with Lou Gehrig’s disease or Amyotrophic Lateral Sclerosis (ALS). He was 35 years old.

Among the many tributes to his life was that of Sports Minister Olivia Grange, who used a quote from Brazilian legend Pele to say that Shelton was “born to play football” and that he had cemented his place in Jamaica’s sporting history.

“Luton has left us way too soon. Jamaica has lost a true son of the soil, a young man who represented us with great distinction on the international stage - a young man who will be sadly missed by us all. The name Luton Shelton has been written in the annals of Jamaica’s sporting history and can never be erased, “ Grange said.

A native of Tivoli Gardens, Shelton played Manning Cup football with Wolmer’s Boys and competed in the local Premier League with Harbour View before moving to Europe, where he would play for 11 years in England, Sweden, Norway, Turkey, and Russia.

Shelton made his international debut in 2004, becoming the only man to date to score four goals in his first game. He would go on to score 35 goals in 75 appearances, becoming the most prolific goalscorer in Reggae Boyz history.

In remembering Shelton, Local Government Minister Desmond McKenzie praised his diligence and determination in making a life for himself despite the challenges of growing up in his community.

“Never forget that Luton grew up at a time when coming out of communities like Tivoli was a challenge, but he used the gift that God gave to him to prove society wrong,” McKenzie said. “Luton was never daunted by where he was from. He was proud to say that this was where he came from. Luton made the kind of impact and impression that have made many stop and think.”

It was not only his achievements and character on the field that were celebrated, but also how he inspired his family. In his tribute, his brother, Shamar Shelton, thanked him for the example that he had set for his siblings as well as others.

“Thank you for being a motivation, an idol to us. I want to thank you for being everything and more. We couldn’t ask for a better leader, we couldn’t ask for a better brother,” Shamar said. “We are here celebrating your life because you were put on Earth for a purpose, and you did succeed with that purpose. Not only in sport, not only in your personal life, but by setting a great example not only for your siblings, but for a lot of your relatives, a lot of your friends, a lot of your well-wishers.”In honour of Shelton, McKenzie said that a scholarship would be established in his name, and Mayor of Kingston Delroy Williams also shared that the former striker would be awarded with the Key to the City of Kingston.